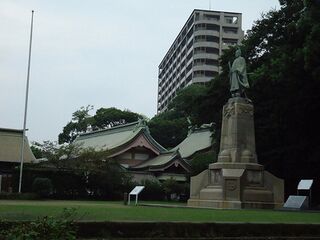 Bronze statue of Shimazu Nariakira, in the Tanshôen gardens, with Terukuni Shrine in the background 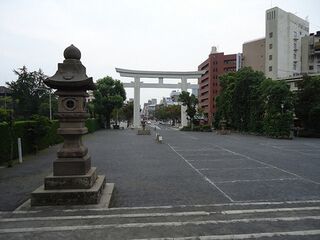 The main approach and main torii of the shrine, as seen looking outwards from the shrine

The shrine traces its origin to a small enshrinement space for Nariakira created within the Tendai temple Nansen-in, in 1862; the following year, Nariakira (who died in 1858) was formally granted deification by the Imperial Court. Construction on a fuller shrine began that year and was completed the following year (1864), being called Terukuni Shrine ("Illuminating the Nation" or "Illuminating Nation" Shrine), while Nansen-in was dismantled. The shrine was officially designated a prefectural shrine in 1873, and in 1882 was then designated an Imperial Shrine of Special Status (bekkaku kanpeisha). Saigô Takamori established a Satsuma Army Cadet School on the grounds in 1874; the Kagoshima Gokoku ("Protection of the Country") Shrine also stands on the grounds.

The main worship hall which stands today dates to 1958, having been rebuilt following its destruction in World War II.

A large bronze statue of Shimazu Nariakira stands within the grounds of the temple, and two of Shimazu Hisamitsu and Shimazu Tadayoshi, along with a number of other significant monuments, stand in the Tanshôen gardens, just outside the shrine grounds, to the east. These were erected in 1917.[1] The shrine holds one National Treasure, a sword by the swordsmith Kunimune; it was given to shrine by Shimazu Tadashige in 1927.[2]