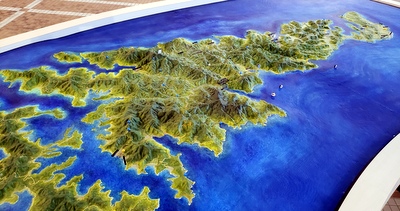 Model of the island on display at the Amami Museum

Amami Ôshima is the largest of the Amami Islands, located to the north of Okinawa Island and administered as part of Kagoshima prefecture. Linked with Kikaigashima in the premodern period, Amami first came under the authority of the Ryûkyû Kingdom (i.e. Okinawa Island) after 1571, and was then conquered by the Shimazu clan of Kagoshima in 1609. Shimazu rule in Amami is known for its oppressive and extractive policies of intensive sugar production, which have been compared to colonialist European plantation practices elsewhere in the world.

Along with the other Amami Islands, Amami Ôshima boasts a distinctive culture reflective of both Ryukyuan and Kyushu influences and elements.

Sites of note on the island include Kasari (a peninsula at the northern end of the island, site of the first Shimazu landing in 1609, and today home to Amami Airport), Naze (one of the main ports on the island; now known as Amami City), Tatsugô, and Uken. The islands of Kakeroma, Ukejima, and Yorojima lie just south of the main island of Ôshima.

People from Amami and the neighboring islands of Kikai and Tokunoshima are recorded as having presented tribute to entities on Kyushu several times in the 7th-8th centuries. In the 990s, Japanese records indicate that "southern barbarians" (nanban) from Amami attacked multiple sites on Kyushu, making off with people and goods; the Dazaifu (the chief government office of the Heian court on Kyushu) claimed authority or jurisdiction over Kikai at that time and ordered Kikai to suppress these raids, which seem to have ended by the year 1000.[1]

Some records suggest that as early as 1266, Amami was sending tribute to leaders on Okinawa Island.

The Ryûkyû Kingdom tried multiple times over the course of the 15th-16th centuries to bring Amami Ôshima under its authority, occasionally clashing with Shimazu forces attempting to do the same. One such clash occurred as early as 1493. Records show a Shuri official named Tameharu being dispatched to Amami and taking up office there as Shuri ôyako (首里大屋子, O: Sui ufuyaku) in 1506,[2] and later kingdom officials resident on Amami traced the origins of their family posts to dates in the 1520s.[3] However, given that Ryûkyû launched additional military expeditions to Amami in 1537 and 1571, it is clear that the island was not fully submissive to Okinawan control until at least 1571. Okinawan forces also clashed with, and drove back, Shimazu forces seeking to take Amami in that year. For the brief few decades when Shuri exercised authority over Amami, it did so lightly, assigning officials and extracting taxes but allowing the island a considerable degree of autonomy, like other relatively distant parts of its territory.[4] Officials overseeing Amami for the kingdom were largely from either local Amami households, or Okinawan households which had become settled on Amami; seven households on the island were of particular prominence. Officials generally sent their sons to Shuri for an education and for them to serve in the royal palace; they then later returned to take up official positions on Amami. The Shuri ôyako oversaw the administration of the entire island; officials known as ôya or ôyako below him administered individual districts, and were assisted by local officials known as yohito. Additional officials known as okite and mezashi were further down in the hierarchy.[5]

Perhaps in part simply because of its size, Amami Ôshima was one of the sites of the greatest resistance to Ryukyuan expansion in that period; when Shimazu forces invaded Ryûkyû in 1609, as well, the island put up considerable resistance, falling to Shimazu control only after about nine days of fighting. While some sources discuss individual local leaders, such as Tamekoro in Kasari and Umitarugane in Yakiuchi, surrendering quickly and being granted posts and stipends by the Shimazu as a result, other sources describe thousands of peasants hastily erecting wooden barricades and doing what they could to resist the invasion, only to be defeated by shipboard cannon and gun-wielding invaders.[6]

Following the 1609 Shimazu invasion, the Shimazu appointed a daikan to oversee the administration of Amami.[7] In the 1610s-1620s, the Amami daikan was granted authority over the neighboring islands of Kikai and Tokunoshima as well.[8] Kagoshima extended the shogunate's policies of maritime restrictions over the Amamis, banning the construction of large oceangoing vessels and overseas travel (including to Okinawa Island and elsewhere in the Ryûkyû Kingdom).[9] Despite these circumstances, however, people continued to travel freely to some extent between Amami and islands to the south, and Kagoshima (at least in certain contexts) continued to regard Amami as part of the territory of the Ryûkyû Kingdom, even while denying Ryûkyû any actual administrative or political authority there.[10]

In a system which Robert Hellyer has described as "a structure of colonial extraction,"[11] Satsuma obliged the people of Amami and the surrounding islands to focus their efforts on sugar production, to the detriment of all else. While the islanders were not indentured or enslaved, did not have their traditional lands taken away from them, and were to a certain extent allowed to maintain their traditional political and social structures, other crops were discouraged, currency was banned from the island, and islanders were forced to sell (trade) sugar to Shimazu authorities for far below a fair market rate. This system of policies forced islanders to work to ensure they could grow enough sugar to both pay their tribute taxes and to purchase (i.e. barter for) the foodstuffs and other things they needed to get by, leading to impoverishment and occasionally serious famines. This extractive and oppressive system of intensive sugar production reached its heights of severity in the 1820s-1830s, when Kagoshima domain karô (elder) Zusho Shôzaemon used Amami sugar as a key element in his efforts to rescue the domain's financial situation.[12]

Despite this strong Satsuma administrative control over the island, however, local Amami elites or those belonging to the Ryûkyû kingdom were still seen as possessing some rights or sovereignty in the land. When the entirety of the Ryûkyû Island chain was annexed by the Empire of Japan in the 1870s, explicit legal/political efforts were made to have the Ryukyuans officially declare that they relinquished claim to or authority over the islands.

In 1771, Amami briefly became a center of attention as a Hungarian man, Mauritius Augustus Count de Benyowsky, landed there and conveyed to officials in Amami false but alarming reports of Russian plans to attack Ezo (i.e. Hokkaidô).[13]

In the late 18th century, Shimazu Shigehide, who had a strong interest in astronomy, botany, and other such pursuits, had botanical gardens established on Ôshima.

In the 1850s, Shimazu Nariakira briefly entertained ideas of making Amami Ôshima a new center of maritime trade with Western powers, thus allowing Kagoshima to skirt the Tokugawa shogunate's policies of "maritime restrictions" and to compete economically against the shogunate's own trade at Nagasaki.[14] Kagoshima signed an agreement with France in the mid-1860s which officially opened Naze and two ports on Okinawa Island to French trade, but it is unclear if anything came of this agreement prior to the dramatic political and administrative changes brought on by the Meiji Restoration in 1868 and the abolition of the han in 1871.[15]

Following World War II, while the Allied Occupation ended in mainland Japan in 1952, and continued in Okinawa and the islands to the south until 1972, protests in the Amami Islands resulted in a restoration of the Amamis to Japanese sovereignty on December 25, 1953.[17]

Amami remains home to a number of unique species, including Amami rabbits, though these have become endangered due to the early 20th century introduction of the Indian mongoose.[18]