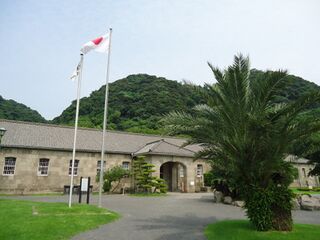 The main building of the Shôkoshûseikan

The Shôkoshûseikan is a museum and archive in Kagoshima closely associated with the Shimazu clan and the history of Satsuma province.

The main hall (honkan) of the museum was originally built in 1865 in accordance with the dying wishes of former daimyô Shimazu Nariakira (d. 1858) as one of a group of factories, dubbed the Shûseikan by Nariakira in 1857/8,[1] and is today considered the oldest Western-style stone factory building in Japan.[2] The structure looks largely Western from the outside, but its interior architectural features incorporate much of traditional Japanese techniques, having been designed and constructed by Japanese builders based largely upon Western written and visual materials. At its peak, the factory employed over two thousand workers.[3] The complex originally also included reverberating furnaces, blast furnaces, a smithy, a foundry, and a glass workshop, producing steel, large and small arms, gunpowder, various chemicals, glass, ceramics, porcelains, paper, petroleum products, and Western-style textiles;[4] much of the compound was destroyed in fires in the 1877 Satsuma Rebellion, but the remains of some of these structures are still visible today.

The reverberatory furnace, completed in 1857 based on a combination of Western and Japanese technology, was over 20 meters tall; it was used primarily to produce cannon. In 1892, Shimazu Tadayoshi had an additional factory structure built; known as the Shûseijo, it was a site for producing pottery, rifles, swords, and mining equipment.

The main building was established as a museum in 1923, and as an Important Cultural Property in 1962. In 2015, it was named a World Heritage Site. The Bakumatsu period industrial history of the area is a particularly prominent theme of the museum, but its collections, roughly 10,000 items in total, also include many objects from the Shimazu family collections, as well as examples of traditional ceramics and objects related to the 1863 Anglo-Satsuma War (also known as the Bombardment of Kagoshima). The second building, or annex, was built following archaeological excavations begun in 1987 which uncovered some of the remains of a foundry previously located on that site. The annex, built to resemble the foundry, houses small rotating exhibits of artifacts, as well as administrative offices.[2]

The Shôkoshûseikan complex today also includes the Iso Palace and Sengan'en garden of the Shimazu clan, originally constructed in 1658 and used as a secondary villa for the Shimazu up until the Meiji period, when it became the primary Kagoshima residence of the family for a time. It continues to be overseen today by the Shimazu Corporation, a chemicals corporation with its origins in the Shûseikan's operations.