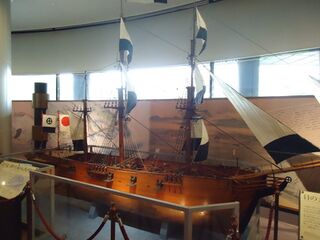 A model of the Shôheimaru, on display at the Museum of the Meiji Restoration in Kagoshima

The project got its start when Shimazu Nariakira, in response to pressures from Western powers, ordered his retainer Tahara Naosuke to research Dutch shipbuilding texts. Construction began in 1853/5 at Setomura on Sakurajima, one month before Commodore Perry arrived at Uraga Bay. The ship was initially called Ryûkyû taihôsen (Ryûkyû cannon ship), but by the time it was completed in 1854/12, after 19 months of trial and error, it was renamed Shôheimaru (昇平丸).

The Shôheimaru sailed to Edo in 1855 without incident, in only 26 days, against the wind, and as the first ship flying the Hinomaru flag Nariakira devised (which would later become the national flag). Later that year, in the 8th month, the ship was renamed again, from 昇平丸 to 昌平丸 (both pronounced Shôheimaru), and it was given as a gift from Nariakira to the Tokugawa shogunate. Katsu Kaishû sailed the Shôheimaru back to Nagasaki the following month, where it was to be used by the shogunate's naval training academy.

In 1869, following the fall of the shogunate, the Shôheimaru, along with the Kanrin Maru, among other ships, were used to ship settlers and development materials to & from Hokkaido. The ship ran aground at Esashi, Hokkaido, in 1870, marking the end of its career.