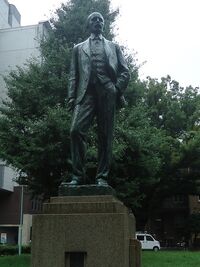 Statue of Conder at the College of Engineering, University of Tokyo Hongô campus 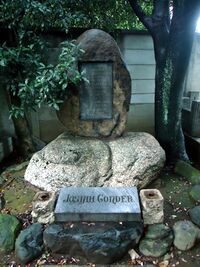 Josiah Conder was one of the most influential architects of the Meiji period, though fairly unknown in Britain,[1] designing the Rokumeikan (1883) and the original main hall of the Tokyo National Museum, as well as instructing or training many of the most prominent Japanese architects of the period.

Born in London, Conder was trained at the South Kensington School of Art, and worked or studied under architects Thomas Roger Smith (a distant uncle of his) and William Burges, before joining the Royal Institute of British Architecture. As indicated on his tombstone, he held the honorary distinction of "Fellow of the Royal Institute of British Architects" (F.R.I.B.A.).

He was invited by the Meiji government to come to Japan to teach architecture, and did so, arriving in 1877 at the age of 24. From that time until his contract ran out in 1884, he taught architectural theory, history, and practice at the newly-founded architecture division of the Imperial College of Engineering (Kôbu gakkô). His approach, teaching that architecture was not just a set of technical skills, but also a creative art, had a particular influence, with some of his students, including Katayama Tôkuma, Tatsuno Kingo, and Tsumaki Yorinaka, going on to design some of Tokyo's most famous buildings, and to become some of the most famous architects in Japanese history, in their own rights. Conder returned to the college as a lecturer in 1886-1888, where Tatsuno had succeeded him as chair of architecture, but for the most part, from 1887 onwards, Conder focused on private commissions.

He completed the original two-story brick main hall of the Tokyo National Museum in 1881, along with a Hokkaidô Products Hall on the banks of the Sumidagawa in the same year. From 1884 until 1891, he oversaw the construction of the Holy Resurrection Cathedral, the chief cathedral of the Russian Orthodox Church in Japan. Conder also designed mansions for the Iwasaki and Furukawa families.

His final commission from the Japanese government - and the final commission by the Meiji government for any foreign architect - was the Ministry of the Navy building at Kasumigaseki, completed in 1895. Two years later, however, he oversaw repairs on the Rokumeikan following an earthquake, installing electric lights, and renovating it otherwise. In 1917, just three years before his death, Conder designed a residence for the Shimazu clan at Sodegasaki in Tokyo; it survives today on the campus of Seisen University.[2]

Conder also wrote a number of books on Japanese art and architecture, including "The Flowers of Japan and The Art of Floral Arrangement" (1891), "Landscape Gardening in Japan" (1893) and "Paintings and Studies by Kawanabe Kyosai" (1911).

After his death in 1920, Conder was buried at Gokoku-ji in Tokyo, alongside his wife, Kume Conder (1854-1920), who died just 11 days earlier. The tombstone indicates that it was erected by their daughter. 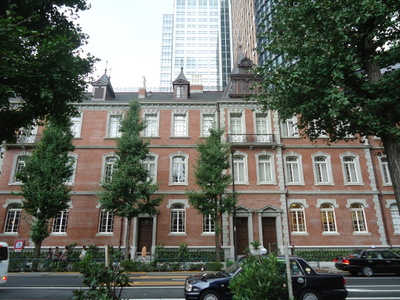 The Mitsubishi Ichigôkan, the first office building in Tokyo's Marunouchi district. Designed by Conder and completed in 1894, it was torn down in 1968, and reconstructed in 2009.