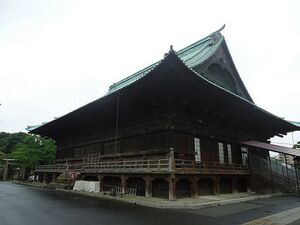 The main hall (hondô) of the temple, an Important Cultural Property dating to 1697

The Gokoku-ji (lit. "Protection of the Nation Temple") in Tokyo was founded in 1682 as a private temple for Keishôin, the mother of Shogun Tokugawa Tsunayoshi.

The temple is dedicated to Daigensui Myôô, a deity associated with the protection of the realm, and in particular the defeat or destruction of enemies of the state. Daigensui is also enshrined in at least one temple in Yamashiro province, serving as protector of the Imperial capital of Kyoto; here, in Edo, he was chosen as a guardian deity to protect the Tokugawa shogunate.

The temple contains a Tôshôgû, a Shinto shrine dedicated to the spirit of Tokugawa Ieyasu, erected within the grounds in 1691. Six years later, the main hall of the temple was rebuilt, and the temple was reestablished as a public temple, no longer a private space. Several buildings on the grounds, including the 1697 Hondô and the Muromachi period Gekkôden, have been designated Important Cultural Properties. The Yakushi Hall (Yakushi-dô), also built in 1691, includes katômado windows, and other elements of Zen architecture, and remains unchanged from its original design, serving as an excellent example of Genroku period architecture.

The previous Yakushi-dô was converted into a Daishi-dô ("Great Master Hall", dedicated to Kôbô Daishi) in 1701; it was renovated and relocated in 1926 to its current location. It is a relatively unadorned structure, and retains many features of medieval architecture. The temple's bell tower, similarly, is one of few surviving examples of a particular style of mid-Tokugawa-period hakama-goshi-tsuki jûsô irimoya-zukuri architecture. The bell itself, dating to the temple's founding in 1682, was a gift from Tokugawa Tsunayoshi in honor of his mother, Keishôin.

Another prominent object of worship at the temple is an image of the 33-bodied Buddha (sanjûsanjin), commissioned in 1704 by Keishôin upon her 77th birthday; each of the thirty-three statues contains a strand of Keishôin's hair, and one is believed to have been sculpted to represent Keishôin herself, as a spirit, deity, or Buddha helping to protect the shogun and his realm.

The temple is also home to a number of tearooms, including one associated with daimyô tea master Matsudaira Fumai.

Adjacent to the Gokoku-ji is the Toshima-ga-oka Cemetery, which contains exclusively Imperial graves.