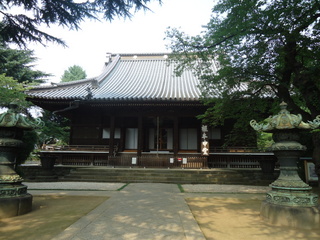 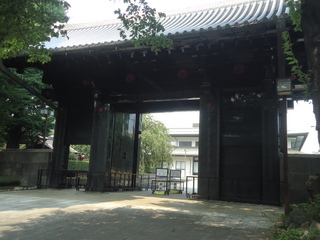 The main gate to the honbô (Abbot's Residence) of Kan'ei-ji, which once stood where the main hall of the Tokyo National Museum stands today. This gate remained in place and served as the main entrance for the museum upon the museum's opening in 1878, but following the museum's reconstruction after the 1923 Great Kantô Earthquake, the gate was moved to its current location, in front of Ueno Rinnô-ji. 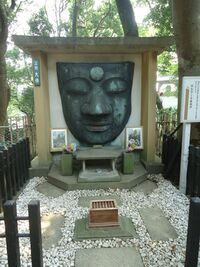 The face of the Ueno Daibutsu, as it is displayed today

Kan'ei-ji is a Tendai Buddhist temple located in Ueno Park; along with Zôjô-ji, it was one of two Tokugawa clan family temples in the Tokugawa shogunal capital of Edo. Six Tokugawa shoguns were buried on the temple grounds; six more are buried at Zôjô-ji.

The temple was originally built in 1625 to help defend the shogunal capital of Edo from the unlucky northeastern direction. It was called Tôei-zan ("East-ei-zan") in reference to it being an eastern counterpart to Mt. Hiei (Hiei-zan), which guards Kyoto in the same manner.[1] Not only this, but a Benten hall was constructed on a manmade island in Shinobazu Pond in emulation of the Benten Shrine on Chikubushima in Lake Biwa, and a Kiyomizu Kannon Hall was constructed in emulation of Kyoto's Kiyomizu-dera.

The construction and establishment of Kan'ei-ji was overseen by Shogun Tokugawa Iemitsu; it was founded by the monk Tenkai, and served as the center of the Tendai sect for the Kantô region. Along with Rinnô-ji in Nikkô and Enryaku-ji on Mt. Hiei, it became one of the chief three Tendai temples in the archipelago, securing, through its connections with the shogunate, the power of Tendai within Japan's religious hierarchies. The shogun typically visited the temple and paid respects to his ancestors on the 10th or 20th day of the new year each year, as well as on other occasions.[2]

Prince Morizumi (Shuchô hosshinnô), a son of Emperor Go-Mizunoo, served as the first head priest (zasu) of the temple, a position which continued to be occupied by members of the Imperial family down through the generations. These monzeki (priests of aristocratic or Imperial lineage) associated with Kan'ei-ji came to be called Rinnôji-no-miya.[1]

The grounds of the temple extended over a large area, much of which is today Ueno Park. At its height in the Tenpô era (1830-1844), the temple covered some 300,000 tsubo, centering on the Konponchû-dô, commissioned by Shogun Tokugawa Tsunayoshi in 1698/9. This hall, which enshrined a statue of Yakushi as its principal image of worship, was flanked by stands of bamboo transplanted from Enryaku-ji. The spot, now occupied by the park's famous fountain, was known as Take-no-utena ("Bamboo Pedestal"), as a result.

During the battle of Ueno in 1868, as the shogunate fell, a group of pro-shogunate loyalists known as the Shôgitai and closely associated with the temple holed up there; Kan'ei-ji was accordingly attacked, and many of its buildings destroyed. Many of those killed that day are formally buried at the temple. In the aftermath of this battle, the Meiji government reduced the temple to one-tenth its previous size, such that it only covered about 30,000 tsubo.

The temple suffered extensive damage and was all but destroyed completely in the Allied bombings of Tokyo in 1945. Several buildings on the grounds survive, or were rebuilt, but the temple grounds, which once covered the full area of what is today Ueno Park, have been shrunk considerably. Shoguns Tokugawa Ietsuna, Tsunayoshi, Yoshimune, Ieharu, Ienari, and Iesada were buried within the grounds. Each of the shogunal tombs originally had six gates leading up to them, as a mark of the shoguns' prestige, though for financial reasons some of these tombs shared gates rather than having a new six gates constructed and maintained. Each of the shoguns is reportedly buried in an upright seated position, facing straight towards Edo castle.[3]

While most of the graves of wives of the shoguns are located in smaller sites located deeper (oku) in the compound, Atsuhime was buried in a tomb of similar style and size to that of her husband Iesada, immediately adjacent to his. Tokugawa Iesato, first post-Edo period head of the Tokugawa clan, is also buried at Kan'eiji, alongside his wife, Tokugawa Hiroko, and son Tokugawa Iemasa; these three graves are located between those of shoguns Tsunayoshi and Iesada.[3]

Many of the buildings and structures surviving at Kan'ei-ji today are designated Important Cultural Properties.

The Ueno Daibutsu ("Great Buddha"), a 2.8 meter tall seated Buddha sculpture in bronze, was first erected on the grounds of the temple in 1631. Its construction was funded by Hori Naoyori, daimyô of Murakami han in Echigo province. The statue was destroyed in a 1647 earthquake, but was replaced by a larger, 3.6 m high, statue funded by the monk Jyoun, who organized collections from the people of Edo. This second statue survived through the rest of the Edo period; damaged in the Ansei Earthquake of 1855, it suffered more severe damage in the 1923 Great Kantô Earthquake, when the face fell off of the sculpture. The rest of the sculpture was melted down for provisions during World War II, but the face has been preserved and remains on display today in Ueno Park, alongside a pagoda erected in 1972 enshrining three small sculptures of Yakushi nyorai and the bodhisattvas Gakkô and Nikkô.