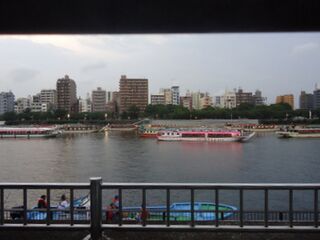 The Sumidagawa, or Sumida River, is one of the major rivers of Tokyo. During the Edo Period, it marked the eastern border of Musashi province, and the city of Edo, dividing these from Shimousa province to the east. A major waterway for commercial and passenger transport, the Sumidagawa was home to both the shogunate's official storehouses at Kuramae, where tax revenue was stored, as well as pleasure boats, choki boats carrying customers to and from the Yoshiwara (to the north along the river), and the annual Sumidagawa Fireworks Festival.

Views of the river, and from the river, as well as numerous sites along its banks, are the theme of numerous ukiyo-e prints.

Around 628, a small golden statue of Kannon is said to have been found in the river by fishermen. The shrine or temple they founded around the statue came to be known as Sensô-ji, and remains one of the oldest and most major Buddhist temples in Tokyo.

The Sumidagawa is mentioned in the Tales of Ise and other works of poetry and literature going back as far as the Heian period; at that time, the area, known as Musashino (Musashi Plains, or Moors), was quite distant from major centers of population and culture, and was strongly associated with the rustic and the lawless frontier. Along with the tall grasses and moon, the Sumida was a major symbol of Musashino.

A tale featuring the river, which appears originally in the Tales of Ise, was later adopted into a Noh play called, simply, Sumidagawa. In the play, a madwoman who has come from the capital (Heian) hires a boatman to help her find her son, who was abducted by slavers. She sees certain birds on the river which look familiar, and which the boatman tells her are called "capital birds" (miyakodori); though there remains some debate today as to precisely which types of birds this refers to, the miyakodori remain a major poetic and artistic motif associated with the river. The tale of the madwoman ends with her learning that her son has already died, and is buried at a temple on the riverbanks, called Mokubo-ji. Though the story is most likely entirely fictional, the temple is real, and a gravemound and associated statues and shrines for the boy can be found there today.[1]

In the Edo period, the river became a major thoroughfare for both official and private commercial cargo, and for passenger transport and pleasure/leisure activities. Bridges thrown over the river during this period include Azuma-bashi (in 1774), a bridge in Asakusa which was the traditional departure point for boats going to the Yoshiwara;[2] and the Ryôgoku Bridge.

In the 1770s until 1790, a small pleasure quarters / entertainment district called Nakasu operated on a sandbar in the middle of the river. The area was particularly popular in the few years from 1787 to 1790, following a fire which destroyed the Yoshiwara. By 1790, however, the shogunate ordered the district closed, and the landfill removed, restoring the flow of the river.[3]

An area on the east bank of the river, known simply as Bokutei (墨堤, Sumi Bank), came to be a particularly popular spot for watching the annual fireworks festival, and remains so today. During the Edo period, this area on the east side of the river boasted some amount of agricultural areas and pasture, and the Ushijima Shrine, dedicated to Ushi-gozen (a bovine noble lady), remains there today. Shogun Tokugawa Iemitsu is known to have practiced falconry there, and his successor Tokugawa Ietsuna planted a number of cherry trees at the bokutei. By the time of Shogun Tokugawa Yoshimune, who had more cherries planted there, it had become one of the most famous or popular sites for hanami (cherry blossom viewing) in the city.[4]

Major sites along the river, roughly from north to south, include(d):