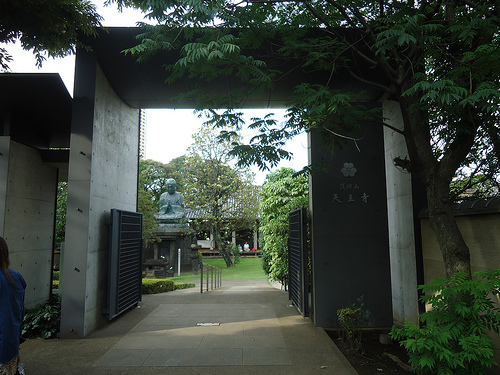 The main gate at Yanaka Tennô-ji, with the bronze Buddha and main buildings visible beyond

Tennô-ji is a Tendai Buddhist temple in Asakusa, Tokyo, which is closely associated with the neighboring Yanaka Cemetery. It is one of only a number of temples in the city established prior to the Edo period.

The temple, originally known as Chôyôzan Kan'ô-ji or Kannô-ji, was officially founded around 1394 to 1427, but traces its origins to a visit by Nichiren to Seki Nagateru, the local lord, in the 13th century. Nichiren is said to have left a sculpture of himself with Seki at that time, for which Seki built a small structure to house it, thus marking the initial origins of what would later become a proper temple.

Large public lotteries were held at Kannô-ji, as well as at Ryûsen-ji in Meguro, and Yushima Tenjin Shrine in Ueno, during the Edo period. These three events thus came to be known as the "Three Lotteries."

In 1698, on the orders of the shogunate, the temple was converted from Nichiren-shû to Tendai; it was then renamed Gokokuzan Tennô-ji in 1833. Much of the surrounding neighborhood was, during the Edo period, within the grounds of the temple. In the early Meiji period, a portion of the temple's grounds was given over to the City of Tokyo, and made into Yanaka Cemetery.

The temple's five-story pagoda was first built in 1644. Destroyed in a fire in 1772, it was rebuilt in 1791 by a group of 48 artisans led by one Hotta Seibei from Ômi province. A tower of zelkova (keyaki) over 34 meters high, it was for some time the tallest Buddhist structure in the Kantô. Donated to the City of Tokyo in 1908, the pagoda survived the 1923 earthquake, and Allied air raids, but was destroyed by arson in 1957. Foundation stones and some other artifacts were discovered in archaeological excavation of the former site, which can still be found today on the edge of Yanaka Cemetery.