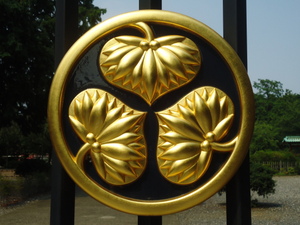 The Tokugawa kamon, as seen on the gates of Kan'ei-ji.

The Tokugawa served as the Shôgun of Japan from 1603 until 1867 and were therefore the longest - and most stable - of Japan's three bakufu. The Tokugawa's actual roots are obscure for while Ieyasu claimed descent from the Nitta and therefore the Seiwa-Minamoto, there seems to be little historical evidence of this. The genealogy Ieyasu commissioned claimed that a branch of the Kôzuke Nitta had taken the name Tokugawa and later transferred to Mikawa province, where it was adopted into the Matsudaira clan. In fact, Ieyasu also maintained an alternate family history that suggested Fujiwara roots - which supports the supposition that the Tokugawa's early family tree was largely made out of whole cloth. The Tokugawa were 'officially' restored when Ieyasu petitioned the court to allow him to use the name Tokugawa in 1566.

They became the new Shôgun following the Battle of Sekigahara (1600) and a formal endorsement by the court in 1603. Ieyasu established three branch families whose role it was to provide heirs when the main line was unable to do so - these branches, the Kii, Mito, and Owari lines, came to be known as the Gosanke (lit. "honorable three houses"), and were of particularly elite status within Edo period Japan. To these would in time be added a number of junior branches known collectively as the Gosankyô: namely, the Hitotsubashi, Shimizu, and Tayasu. Along with roughly seventeen families retaining the name "Matsudaira," the lords of these lines were known collectively as the kamon or shinpan daimyô, or as "collateral" houses. Members of these six lineages (the gosanke and the gosankyô), along with those of the mainline Tokugawa lineage, were the only ones eligible to become shogun. However, members of these collateral houses were not eligible to become rôjû.[1]

"Tokugawa," like Taira, Fujiwara, Minamoto, and Toyotomi, was an aristocratic clan name, bestowed by the Emperor. This set the Tokugawa apart from those who bore merely a samurai surname, such as Matsudaira,[2] and who were thus jigenin, outsiders to the Court aristocracy.

The clan survives today, with Tokugawa Tsunenari (b. 1940) being considered the eighteenth head of the clan. Tsunenari has published a book called Edo no idenshi, published in English as The Edo Inheritance, in which he argues against the Meiji period idea that the Edo period was a "dark ages," and that the Tokugawa shogunate held Japan back. He regularly attends or presides over special occasions, such as the upcoming 400th annual memorial service for Tokugawa Ieyasu, to be held in 2016.[3]

Generals of the Tokugawa clan during the Sengoku Period