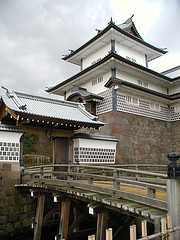 Kanazawa castle was the political center of Kaga han, the wealthiest daimyô domain in Edo period Japan, and residence of the Maeda clan lords of Kaga.

After having campaigned against the Ikkô-ikki of Kaga province on behalf of Oda Nobunaga, Maeda Toshiie began to make plans to construct a castle to oversee his new lands, obtained following victory in the 1583 battle of Shizugatake, in which Sakuma Morimasa, who had controlled Kaga, was defeated. He chose the location of the village of Yamazaki (not the same site of the battle involving Akechi Mitsuhide), which had held the Oyama Gobô, a Buddhist temple-fortress subdued by Toshiie, upon which to construct it. Construction began upon Kanazawa castle in 1580 after Sakuma Morimasa seized the site, and was completed under Maeda Toshiie in 1592. As the fortunes of the Maeda clan increased under the reign of Tokugawa Ieyasu, this castle was rivaled only by Osaka and Edo in size and majesty. At its height, the castle boasted over twenty towers.

However, the complex was quite frequently beset with conflagrations. Beginning in 1602 when the tenshu was destroyed by fire, no fewer than 30 major blazes were reported. The tenshu was never rebuilt, though a three-story tower was built to replace it. The honmaru was expanded in 1621, but it was destroyed a mere ten years later, along with that three-story tower. Following this 1631 fire, the daimyo residence and center of power was moved to the ni-no-maru (second bailey), where a structure known as ninomaru goten (second bailey palace) was built for that purpose. Another major fire raged through the compound in 1759, and while much of the castle was repaired afterward, some structures, such as the inui-yagura (northwest watchtower) were not rebuilt. Though the honmaru was likewise never rebuilt, the Maeda doggedly continued to repair the damage to other parts of the castle after each incident, and even initiated new construction (a rarity during the Edo period when castle construction and repairs were highly restricted and regulated).

The major gatehouse - the Ishikawa-mon - was built in 1788, and as late as 1858 the Maeda constructed a new armory (a two-story, 30-bay structure, giving it the name of Sanjukken Nagaya) along with several other structures. The castle finally met its doom when the Meiji government took command of the site in 1871 and destroyed many of the buildings, those in the second bailey (ni-no-maru) lost to a fire ten years later in 1881.

Today, a number of structures of Kanazawa castle has been rebuilt, including the Ishikawa-mon, Gojukken-nagaya, Sanjukken-nagaya, and Tsurumaru storehouse, though not including the tenshu or other honmaru structures. The castle site was used as a military base in the Meiji period, and was home to Kanazawa University from 1949 until 1989. In 1997, the site was officially designated "Kanazawa Castle Park." Archaeological excavations continue, and several structures in the compound were reconstructed in the early 2000s using wood and traditional joinery methods.

The Ishikawa-mon originally protected the rear entrance to the castle, but today has become the main entrance, and a symbol of the castle and of the city. The gate faces the Kenrokuen to the east, and is accessed via a bridge extended over what was once a moat, known as Hasuikebori (蓮池掘, "Lotus Pond Moat") or Hyakkenbori (百間掘, "Hundred Bays Moat"). Today, a roadway runs in its place.

The stone walls of the castle were repaired and restored in 1765, though the structures standing today which compose the Ishikawa-mon date to 1788. The Ishikawa-mon is a masu-gata (枡形) or "square gate," composed in fact of two gates through which a visitor or invader must pass. Upon entering the triple-roofed Kôrai-mon (高麗門), one must turn ninety degrees to pass through the two-story Yagura-mon (櫓門) boxing a small courtyard. Guards stationed atop the walls of the gatehouse and in a two-story watchtower overlooked and defended this courtyard, the bridge, and beyond.

Like most structures in the compound, the Ishikawa-mon features lead tile roofs and namako plastered walls, for protection from fire. These structures feature the famous Kutani lead tiling from the region. These were designed to be melted down for bullets in the event of a siege against the castle. The Ishikawa-mon protected the rear entrance to Kanazawa and has a triple-roofed Korai-mon and a two story Yagura-mon boxing the courtyard. The distinctive so-called namako kabe or "sea cucumber walls" of Kanazawa castle are made from plaster walls inlaid with a great many square slate bricks, forming a sort of grid pattern and offering better protection from the heavy snowfalls typical in the region. The walls were further propped up from the back by wooden struts known as hikae-bei (控塀). A plank could be laid across these in a siege, allowing defenders a higher position from which to attack over the wall.

The Ishikawa-mon grants access to the shinmaru ("new bailey") and san-no-maru (third bailey), which once held retainers' mansions, an arquebus armory, and various workshops and artisan studios. The gojukken-nagaya ("Fifty Bays Long Armory") separates this space from the more central, and more important, ni-no-maru (second bailey).

Access to the ni-no-maru is attained chiefly via the hashizume-mon (橋爪門, "Bridge Claw Gate") at a corner in the center of the fifty-bay-long structure, where it turns to form a 90-degree angle. A short bridge extends like a claw from the gate, over a narrow moat which runs the length of the nagaya. One can easily imagine how significantly access could be denied by closing this gate, and how quickly a bottleneck would be formed in a large invading force passing through this point, even if the gate were open. The bridge and gate are further defended by a watchtower, known as the hashizumemon tsuzuki yagura (橋爪門続櫓) or waki-yagura (脇櫓), located at the corner of the nagaya.

The Gojukken-nagaya is today the chief structure of those which remain or were rebuilt. It houses a series of exhibits about the history of the castle and its construction, and allows visitors to climb into the watchtowers, providing an impressive view out over the castle grounds and beyond. Originally, it served as an armory, a storage space for arms and armor. A watchtower at its north end is called the Aoi-yagura (葵櫓).

Another important building in the complex is the Tsurumaru storehouse, which along with the Ishikawa-mon and Sanjukken-nagaya, is one of the few buildings still extant from the Edo period. Built towards the end of the Edo period, it is quite similar in style and form to the storage house of the Seikonkaku in Kenrokuen, which was built in 1863. The Tsurumaru storehouse was used as storage for military uniforms during the Meiji period, and was repaired and restored at various points, but on the whole reflects its original Edo period form.

The honmaru has been allowed to become overgrown, and has returned to forest, unlike the rest of the castle grounds which, while largely empty of buildings (as compared to how it would have looked during the Edo period, full of retainers' mansions, administrative buildings, workshops, etc.), have been maintained as smooth, empty grassy spaces. A sign marks the general area where the buildings comprising the honmaru once stood.

Archaeological excavations have uncovered considerable sections of stone wall, as well as the remains of structures such as the Nirami Tower, Ichi-no-mon and Ni-no-mon surrounding the Kawakita-mon to the west of the Ishikawa-mon.

Other structures on the grounds or otherwise closely associated with the castle include Oyama Shrine and Kanazawa Shrine, established by the Maeda lords, the Kinjô-reitaku well which gives the city its name, and several old samurai houses including ones associated with Tsuda Genba and Takamine Jôkichi.

The castle town of Kanazawa which grew up around the castle remains today one of the most intact Edo period castle towns in Japan, and an oft-cited example of a provincial castle town. The famous (and practical) Kenrokuen garden, one of the three top famous gardens in Japan, lies adjacent to the castle. The streams feeding the garden also served the purpose of supplying the castle town with water, and the terminus of these streams was shaped into a replica of Lake Biwa near Kyoto. The castle town spawned the Kaga Hôshô school of Noh. Kutani pottery was first made here, and the Maeda lords sent missions to China and Korea for technical advice on ceramics. The area was also famous for its wrought-iron tea kettles used for tea ceremony.

The temple of Myôryû-ji (also known as the ‘ninja temple’), located across town from the castle, is another famous site in the city. It was designed to look like any other Buddhist temple, but actually was a seven-story fortress. Because the Maeda were the wealthiest clan in Japan after the Tokugawa, they were under intense surveillance by Ieyasu’s spies. To avoid this scrutiny, the Maeda conducted much of their important business at Myôryû-ji. It is often said that they were able to reach the ‘temple’ unobserved via the central well, which in addition to supplying water featured a tunnel straight to Kanazawa Castle; however, such a tunnel would have had to pass through the river, and no evidence of such a tunnel has been found. Myôryû-ji is loaded with other secret doors and passages and all the interior windows face the well (supposedly in order to maintain surveillance on the comings and goings from it). One of many traps and tricks in the temple is the coin collection chest in the main worship hall; it looks like any other contribution box in any temple, but actually disguises a trap door designed to drop an enemy to his death.