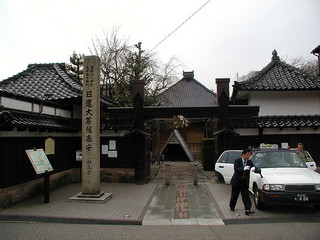 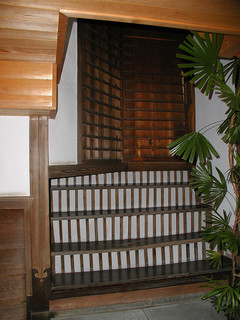 Myôryû-ji is a Buddhist temple in the Teramachi (temple district) of Kanazawa. It was established in the late 16th or early 17th century as a refuge for the Maeda clan lords of Kaga han, and for their families, in case Kanazawa castle came under siege. The temple was equipped with all sorts of trap doors, secret passageways, and the like in order to help it resist invaders, it is popularly known as "Ninja-dera" (lit. "Ninja Temple"). Myôryûji has no true connection with ninja, however, and emphasizes this lack of a connection time and again in pamphlets and the guided tour, while simultaneously playing off the ninja connection to attract visitors.

Myôryûji appears from the outside to be only two stories tall, but the intricate interior architecture contains four stories and a seven-layer structure. It thus abides by shogunate prohibitions on the construction of buildings over three stories tall, while in fact containing many more rooms and levels on the inside, as well as many hidden passageways and secret doors. Other tricks and traps include a spiked pit below the collection box in the main worship hall, and another pit below one of the staircases. One of the secondary entrances to the temple is accessed via a short set of shôji-lined steps. The semi-translucent paper steps allowed defenders inside the temple to see the shadows of invaders' feet upon the steps, and to attack them, surprising the invaders by putting spears up through the stairs. That same entrance features a trick sliding door and secret passageway. From the inside, if one slides the door open in one direction, it leads outside, but slide it open in the other direction, and it reveals a hidden staircase to a secret room. As long as the door to the outside is open (such as when invaders are letting themselves in), the door to that staircase is blocked and hidden.

The temple is accessed through an unusual triangular entranceway, which leads to the more typical broad facade of a Buddhist temple, leading in turn to the main worship chamber. A small lookout room on the top of the temple looks out over the area, and provides a view as far as the castle and across the Kaga plain to help one detect approaching armies. Some rumors claim that a well located inside the compound connects to an underground passage, allowing travel underground between the temple and the castle, so that members of the Maeda family could flee in secrecy if they needed to. However, since the temple was moved to its current location in 1643, even if there had been a passage at the temple's former location, it is extremely unlikely that such a passage connects up now.

Though it is not explicitly certain, the hypothetical situation of the castle being attacked, and the Maeda needing to flee, would seem to imply that the expected attackers would be agents of the shogunate. In the early years of the Edo period, daimyô may have been concerned that the shogunate would fall, and that other daimyô (or other powers, such as ikki or peasant uprisings) might seek to attack the castle. However, the Maeda, being the wealthiest daimyô in the realm, and not historically close allies of the Tokugawa clan, would likely have also been concerned about the shogunate seeking to remove them from their territory. Myôryû-ji served as an escape plan.