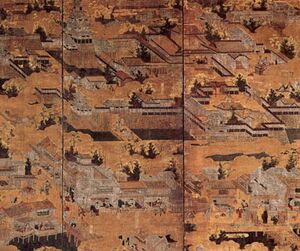 Osaka castle, which towers over the city of Osaka, is one of the most famous castles in Japan today. It is a modern reproduction, built in the post-war period. At its height, the castle was the chief home base of Toyotomi Hideyoshi; prior to Hideyoshi's time, the site was that of the Ishiyama Honganji, and, following the fall of the Toyotomi clan, it became a major center of Tokugawa control in the Kinki region.

The site of Osaka Castle, located on the Yodogawa delta in present day Higashi Ward of Osaka City, had a long history of illustrious tenets before the castle was built. Emperor Ôjin and Emperor Nintoku are said to have built their palaces there, and the Buddhist priest Rennyo built the Jodo Shinshu temple of Ishiyama Hongan-ji on the site in 1496. The site was increasingly fortified by the Ikko-ikki adherents of Jodo Shinshu. The fortified temple complex eventually came under attack from the warlord Oda Nobunaga. Oda began a systematic siege of the temple that lasted off and on for ten years. He cut the fortress off from outside naval aide and also succeeded in reducing the number of satellite temples that Ishiyama drew support from. Finally, after conquering three of the five interconnected strongholds during a campaign that began in 1577, Nobunaga (with the intercession of the Emperor) forced its surrender in 1580. The surrender was no doubt hastened by his tactic of floating junks past the fortress walls filled with the ears and noses of attempted escapees.

After Nobunaga’s death in 1582, one of his former generals, Toyotomi Hideyoshi, began construction of a castle on the site in 1583. Employing 30,000 men and 1000 shiploads of stone per day, the castle took three years to complete. From it Hideyoshi accepted the submission of Tokugawa Ieyasu, directed the Odawara castle and Korean campaigns, and received Chinese delegations during the Korean invasion.

The Toyotomi version of Osaka-jo had an eight story tenshu that stood 102 feet tall on a 75 foot stone base. There were 124 other corner towers around the complex. The circumference of the grounds measured 8 miles and in area about 185 acres. The huge moats were anywhere from 80 to 120 yards wide and were up to 36 feet deep.

Hideyoshi gave the castle to his son Toyotomi Hideyori and retired to Fushimi Castle. After Hideyoshi passed away in 1598, his erstwhile vassal Ieyasu began to put his plans in motion to gain control of the nation. Ieyasu defeated the forces of the West led by Ishida Mitsunari at the Battle of Sekigahara in 1600. However, while the Western forces were comprised of many Toyotomi loyalists, Hideyori and his mother Yodo-gimi did not involve themselves directly in the fighting. While Ieyasu was later declared Shogun (and in turn his son Tokugawa Hidetada), he realized that as long as the Toyotomi existed they were a threat to his power. Seizing upon an excuse provided by an inscription upon a bell that had been sponsored by the Toyotomi (Ieyasu stated that it was meant as an insult to the Tokugawa), Ieyasu gathered together an army of up to 194,000 men and set out to conquer Hideyori and his army of about 100,000 ensconced in Osaka Castle. Thus began the 1614 Winter Campaign of Osaka.

The castle was in an enviable natural position, being surrounded on three sides by water (the Nekomagawa and Hiranogawa to the east, the Yamatogawa and Yodogawa to the north, and the Ikutama canal and Osaka Bay to the west). To further fortify the castle, additional defenses were added around the northwest, southwest, and southeast gatehouses. A large ditch crowned by palisades was dug between the easiest avenue of approach from the south (between the Nekomagawa and Ikutama canal). A further fortification was built out from this line and became known as the Sanada-maru after the commander of the troops occupying it, Sanada Yukimura. Actions during the Winter Campaign primarily revolved upon the reduction of the forts surrounding Osaka-jo such as the Nakajima area to the north, Kizugawaguchi to the southwest, Shigino and Imafuku forts to the northeast, Bakuroguchi to the west (aided by the fact that the commander, Susukida Kanesuke, was drunk in a brothel at the time of the assault), and Noda-Fukushima to the northwest. After failed attempts at storming the defences at the Sanada-maru, the Hachomeguchi and the Tanimachiguchi, Ieyasu decided to let his superior artillery and diplomacy carry the day. The range of his western cannon (bought from the British East India Company and Dutch traders, along with one large gun cast by Shibatsuji Ryuemon Sukenobu) allowed him to shell the Osaka tenshu with impunity-Hideyori’s cannons lacked the range to fire back. The bombardment provoked a successful raid by Hideyori’s forces at Honmachi-bashi, but otherwise proved very effective at driving the Toyotomi to the bargaining table (in particular by terrifying Yodo). In early 1615, peace of a sort was made as Hideyori was allowed to retain control of the castle after promising to not rebel again. The ronin defending the castle were disbanded and sent on their way. Ieyasu’s main army marched away, and all seemed well, but…

The very next day, Tokugawa troops began to destroy the outer wall of the Osaka defenses and threw the debris into the outer moat. Within 26 days, the moat had been completely filled in. The Toyotomi lodged a protest with Ieyasu, but by the time his apology for the behavior of his troops arrived, the work was a done deal. The castle defences were now just a shadow of their former self.

Later that summer, Ieyasu began to reassemble his army. Hideyori began to gather ronin again and attempted to clear the outer moat. Ieyasu used this as his newest excuse to once again march on Osaka Castle. For the 1615 Summer Campaign Of Osaka his army numbered about 160,000 and the Toyotomi forces between 60,000-120,000 (troop estimates vary wildly due to an unknown number of ronin). Recognizing the weakened state of the castle, the Toyotomi defenders decided their best bet was a preemptive strike against the Tokugawa forces that would keep them from reaching the castle. Unfortunately, the strikes at Koriyama-jo to the east and Kashii to the south proved to be failures. A last ditch effort at delaying the Tokugawa forces resulted in devastating losses to the Toyotomi at Domyo-ji, Yao, Wakae, and Yoshida. The following day, Hideyori’s remaining forces gathered on the plain of Tenno-ji to the south of the castle for one last battle. Despite initial success, the superior numbers of the Tokugawa began to tell and when the heroic Sanada Yukimura was slain, the Toyotomi began to crumble. By nightfall, the Tokugawa forces had occupied the castle grounds and Hideyori was barricaded in the tenshu. After his efforts at making peace with Ieyasu failed, Hideyori and his mother retired to Yamazato Kuruwa behind the tenshu and commited seppuku. All of the castle’s structures were destroyed and the mighty edifice of the Toyotomi was no more.

The castle grounds were given to Matsudaira Tadaaki, but in 1619 the Tokugawa family took over direct control. A massive rebuilding project was started in 1620 and lasted for 10 years. It was designed as a symbolic gesture-to show the supremacy of the Tokugawa over the Toyotomi-but mainly it served to empty the coffers of the daimyo that were assigned to the work and keep them from trying to finance further rebellion. Under the supervision of Todo Takatora, the Tokugawa version of Osaka Castle was to become the second most elaborate and extensive fortification in Japan, trailing only the seat of power at Edo Castle.

The castle became the headquarters of the Osaka jôdai, the shogunate's chief administrator over the city and the immediate surrounding region. Four daimyô of the surrounding areas were assigned to oversee the castle's guard duty, rotating every eight months.[1]

The Toyotomi stone walls were covered with soil and new walls were built on top of them. The tenshu was moved eastwards and was now only five stories. Construction began on the tenshu in 1628 and was finished in 1630. In 1665, the tenshu was struck by lightning and burned to its foundation. As peace had reigned for many years and the castle fallen into disuse, it was not rebuilt. Many years passed, and the castle became the seat of the local government. In 1837 troops stationed there were used to quell a rebellion led by Ôshio Heihachirô. The castle was also used to receive foreign diplomats in the 1850’s and 1860’s.

During the Battle Of Toba-Fushimi in 1868, Shogunal troops burned many of the castle’s buildings while retreating from Imperial forces. A new tenshu (built of ferro-concrete) was raised in 1931 by the city of Osaka. The castle was used to house troops during World War II, but suffered extensive damage from Allied bombers, losing four more turrets. The castle tenshu received an extensive makeover in the late 1990’s which brought it to its current state.

Osaka Castle today is one of the most accessible and interesting castles in Japan. None of the Toyotomi structures or walls remains visible, and only four of the original Tokugawa turrets remain. There are several later Edo Period buildings there as well, including the Ote Yagura Mon, the gunpowder storehouse, and the treasure storehouse. The massive fitted stone walls and moats remain to attest to the might of the structure. The tenshu purports to be a recreation of the Toyotomi keep, but as it was built on the Tokugawa foundation stones, the dimensions are quite different. In addition, the Toyotomi keep was black and the current structure is white with green roof tiles. There’s also that darn elevator attached to the outside of the building! Other highlights on the grounds include the massive stones donated by daimyo to demonstrate their wealth and power. These include the Higo Ishi (48 feet long and 19 feet high), the Tako Ishi (19 feet high and 37 feet long), and the Furisode Ishi. In a recent excavation, these stones were found to be not as massive as they seem, as they are only about two feet thick.

The tenshu has 8 floors and one can spend an entire afternoon enjoying it. There are films shown continuously in several languages on the history of the castle, recreations of Hideyoshi’s golden tea house, an entire floor devoted to the history of the Winter and Summer campaigns, a audio-visual series of presentations using holograms of actors and models that gives the life story of Hideyoshi, and the expected gift shop at the top (along with great views of Osaka). The real gem is the museum of historical artifacts. While the items on display rotate, they have an unrivaled collection of painted battle screens, armor, swords, firearms, and letters written by many famous daimyo.

The site of Osaka castle also undergoes ongoing excavations and examination. The first major project involved examining every stone in every wall, and cataloging what daimyo was responsible for that section of construction (most of the stones have the daimyo’s seal chiseled into them). This involved draining the wet moats and took quite a few years. There was also the aforementioned project that examined in greater detail the large stones. In an excavation just inside the inner walls southeast of the tenshu, portions of the original Toyotomi walls were uncovered. These walls featured smaller stones than the Tokugawa walls and were stacked rather haphazardly. Finally, around 2003, some of the extended fortifications built around the gatehouses during the Winter Campaign of 1614 were excavated and restored.