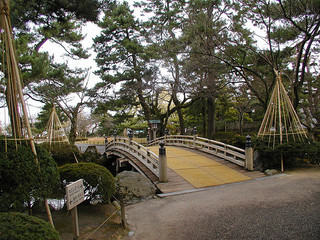 A bridge within Kenrokuen; yukitsuri can be seen on the trees and bushes.

Kenrokuen is one of the most famous Japanese gardens in the country, and was formerly the private gardens of the Maeda lords of Kaga. Established in 1874, it was one of the first modern public parks in Japan.[1]

The name "Kenrokuen," literally meaning "Garden of the Six Attributes," was given to the garden by shogunal official Matsudaira Sadanobu. He felt the garden (園) possessed concurrently (兼) six (六) traits that a garden ought to possess, namely:

The garden has been officially designated a Special Place of Scenic Beauty (特別名勝, tokubetsu meishô).

Attached to the rear of the castle (the Ishikawa-mon now serves as the front/main entrance), the hill on which Kenrokuen sits was originally the site of a secondary fortress/castle to help defend this rear entrance. The fifth lord of Kaga, Maeda Tsunanori transformed it into his private garden. Later lords added further pavilions and other structures.

Kenrokuen is famous for its appearance in the snow. Trees and bushes are covered in rope structures called yuki-tsuri which are meant to protect their branches from being weighed down and broken by the weight of snow accumulating on them.

One of the most famous sights in the garden is a small stone lantern held above the surface of the main pond on two long stone legs. Known as kotoji-tôrô (琴柱灯篭), it is said to resemble the bridge of a koto.

The garden includes the oldest fountain in Japan, though it only dates back to the 19th century. Fueled by the difference in water level (height, topography) between the pool of water in which it is located, and the nearby Kasumigaike (Kasumi Pond, or more literally, Pond of Mist), the fountain reaches a height of roughly 3.5 meters.

A large statue of Yamato Takeru, 5.5 meters tall, atop a 6.5 meter high stone pedestal, was erected in 1880, in memory of 400 men from Ishikawa who died in the suppression of the 1877 Satsuma Rebellion. This has been cited as the first bronze statue erected in Japan to honor "historical persons of merit."[2]

Buildings within the garden, or immediately adjacent, include the house of Maeda retainer Tsuda Genba (1651‐1724), and Kanazawa Shrine. A row of machiya shops and restaurants erected in the late 19th century stands just outside the gates.