From SamuraiWiki
(Redirected from Tea ceremony)
Jump to navigationJump to search 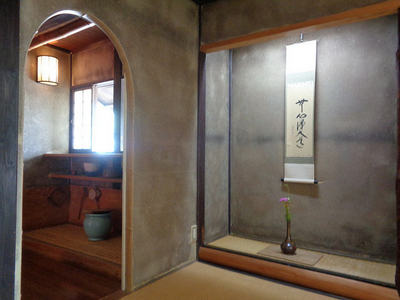 Tea culture, often referred to as "tea ceremony," is one of the most famous elements of Japanese traditional arts. Originally a relatively un-ritualized element of elite banquets, tea practice became formalized into an art in the late 16th century (the Azuchi-Momoyama period), and came to be promoted as a key part of Japanese traditional culture in the Meiji period.

Elite samurai patronage and practice of tea ceremony in the 15th-16th centuries was central to numerous developments in ceramics, architecture, and collecting practices in those periods.

Though the term "tea ceremony" remains widely known and used in English, many scholars have begun to use the term "tea culture" instead; this serves both to emphasize the broader culture around tea practice, including aspects of art appreciation and architecture, that are not strictly limited to the so-called "ceremony," and to critique or challenge the Meiji period formalization of tea as a "national" and "traditional" "art."[1]

In the Edo period the term chanoyu was the most commonly used formal term for the practice of making tea according to ritualized procedures known as temae. However, in the Meiji period the term sadô ("Way of Tea") came to be used to emphasize or "evoke connotations of a spiritual path connected to tea practice."[2] After World War II, the Urasenke school began promoting the reading chadô instead of sadô. Regardless, from the Edo period through today, it was and remains extremely common to simply speak of "doing tea," "making tea," or "practicing tea," simply using the word ocha (lit. "tea").

Tea may have been first introduced to Japan in 805 by Saichô, who also introduced Tendai Buddhism. Tea only first gained popularity in China around one hundred years earlier.[3] Powdered tea, like that most typically used in tea ceremony, was then introduced alongside Rinzai Zen by Eisai, in 1191.[4] However, it was not until the Muromachi period that tea ceremony as a practice really has its origins.

Though tea was consumed by people of all classes, formal tea ceremony grew out of 13th-14th century practices at Zen temples. It soon became one of a number of activities in which samurai, court nobles, and other elites engaged at elegant but raucous banquets. While many of the physical or choreographic elements of the tea ceremony were already present at this early stage, the act had little spiritual or deeply aesthetic component at this time.

Tea began to transform into a more subdued and refined art over the course of that period, however, a ritualized practice focusing on the preparation of the tea according to particular procedures known as temae, and the tea utensils used, changing in accordance with the practitioner's refined sense of seasonal aesthetics and consideration of the hierarchical status of the guests. The tea prepared generally takes one of two forms: thin tea (usucha), which is less formal and involves less complex ritual; and thick tea (koicha). Tea gatherings (chakai) in the Edo period typically involved a kaiseki meal, a single shared bowl of thick tea, and individual bowls of thin tea for each of the guests, who usually did not number more than five.[5]

The ritual of serving tea places strong emphasis on the roles of "host" and "guest," but even so, guests are required to be familiar with the specified movements and practices expected of them - including when and how deeply to bow, how to receive a bowl of tea, how to drink it, and so forth.

As the ritual also involves the use and display of the host's treasured things - including both the tea implements themselves (bowls, bamboo tea scoops, ceramic tea caddies) and paintings hung in the tearoom - tea practices were centrally influential in architectural innovations such as the tokonoma (an alcove in which seasonally and thematically appropriate paintings and flowers are displayed, helping to set a tone for one's guest), chigaidana (a stepped, asymmetrical shelf), and built-in writing desks, standard elements of elite architecture from that time forward. Tea thus also connected closely into collecting practices, and many lords and other elites of the time (particularly the Ashikaga shoguns) retained cultural advisors called dôbôshû to advise and manage their collections. Chinese objects (karamono) were particularly sought-after by shoguns and others at this time, and tea ceremonies offered an opportunity for elites to show off their tenmoku bowls, Mu Qi paintings, and the like, obtained largely from merchants and from Zen temples; these were powerful symbols of the owner's connections with significant individuals, elite institutions, and overseas networks. Once works amassed a famous provenance, having passed through the hands of prominent tea masters or warriors, they became increasingly powerful as symbols of the power and prestige of their owners.[6]

Though Sen no Rikyû, advisor to Toyotomi Hideyoshi in the late 16th century, is generally credited with (re)inventing the tea ceremony in the wabi-sabi form it has come to be most strongly associated with, wabi-cha had its start decades earlier, amongst the merchants of Sakai. Tea masters based in Sakai in the early 16th century, including Takeno Jôô, Kamiya Sôtan, Tsuda Sôkyû, and Imai Sôkyû, are credited with furthering the development of wabi-cha, the practice of simple but aestheticized tea. Among the merchants of Sakai, tea was one of the chief modes of cultured socializing, and helped create a space of equality and safety (a sort of neutral zone, in a sense) for political discussions and mercantile negotiations.

In the late 16th century, Sen no Rikyû then led the way in further refining the wabi-cha tradition, and indeed many of his innovations remain central to the tradition today.

Tea then came to be employed by many daimyô of the Azuchi-Momoyama period, including Oda Nobunaga and most especially by Toyotomi Hideyoshi, as a mark of refinement and cultivation. To that end, Hideyoshi held a Grand Kitano Tea Ceremony in 1587, and also built a tea room in which every surface, and every tea implement, was covered in gold foil, showing off his wealth and power at the same time that he demonstrated his deep involvement in cultural pursuits. Though historian Eiko Ikegami emphasizes the tea arts as a space outside of status hierarchies and official controls, Hideyoshi sought to bring the world of tea ceremony under his control, declaring that any tea masters who did not attend his Grand Kitano Tea Ceremony would be banned from performing tea ceremony thereafter.

Even after the introduction of wabi-sabi aesthetics, which emphasizes the beauty and value of the plainest objects - including objects which are flawed or even cracked - the aesthetic appreciation of the implements used in the tea ceremony remained a prominent part of the experience. Further, despite the aesthetic and ideological emphasis on simplicity, even the simplest, plainest, and even flawed or broken tea articles quickly came to be considered to be of great monetary value, either purely because of their aesthetic value, or because of their association with famous owners, users, or events. Many elites of the day, as well as many dedicated tea ceremony practitioners today, cherished showing off their famous or historically significant tea wares (meibutsu). For example, some teabowls and other tea implements which once belonged to Nobunaga or Hideyoshi, and which were associated with Sen no Rikyû, or with other masters such as Murata Shukô, continued to be passed down through the generations, and are treasured items in private and museum collections today.

The Urasenke and Omotesenke schools of tea ceremony which, along with the Mushanokôji senke, dominate the world of tea ceremony today, were founded in 1646, distancing from one another and creating a great split in the Sen school following the death of Rikyû's grandson Genpaku Sôtan in 1658.[7] All three take after Sen no Rikyû's style, and claim some sort of descent (through disciples) from Rikyû himself. Meanwhile, other schools of tea, practicing a more ostentatious style known as daimyô cha (in contrast to the Sen schools' simpler, more restrained wabi-cha), claimed descent from various prominent daimyô; not nearly as prominent today, these include the Oribe, Sekishû, Enshû, Yabunouchi, and Horinouchi schools.

In the 18th century, many Sinophile literati enjoyed a Chinese-style sencha tea ceremony, as promoted by Baisaô among others.[8] This coincided with a renewed popularity of Chinese ceramics and Chinese culture more broadly.[9]

The 1872 Kyoto Exposition saw the introduction of ryûrei, a form of tea ceremony performed seated in chairs around a table, thus making it both more accessible & attractive to Westerners, and more accommodating to the Westernized decor, furnishings, and lifestyle of Meiji Japan.

Okakura Kakuzô's 1906 Book of Tea may be credited with being the first major means by which tea ceremony was introduced to the United States.

Today, women make up some 90% of tea practitioners, but top-level positions of power and authority in the major schools of tea (incl. Urasenke, Omotesenke, and Mushanokôji-senke) continue to be passed down through the hereditary line from teachers to sons or male students in the iemoto system.

In the style of teahouse and tea ceremony derived from Sen no Rikyû's tradition, the guest first enters via a small square entranceway called a nijiri guchi, which requires the guest to stoop down, and kneel immediately upon entering. The inside of the teahouse, typically a fairly small space, is meant to be quite simple and plain in its aesthetic, in accordance with the ideals of wabi-sabi.

In the fullest forms of the tea ceremony, the host traditionally lays charcoal, serves a kaiseki meal, prepares a bowl of thick tea (koicha) which is shared by all the guests, and then a bowl of thin tea (usucha) for each guest. It is said that drinking tea out of the same bowl enhances a sense of community or oneness with one's fellow guests. Ikegami emphasizes the role of tea ceremony, along with certain other arts, in creating an aesthetic social space cut off from the identities and status hierarchies of the outside world. Within the teahouse, all are equals.

Tea events today, especially when organized as a demonstration, can be quite large, with guests serving more as a passive audience than as active participants. By contrast, in the early modern period it was far more typical for gatherings to involve around five guests, who were typically knowledgeable in the proper etiquette.