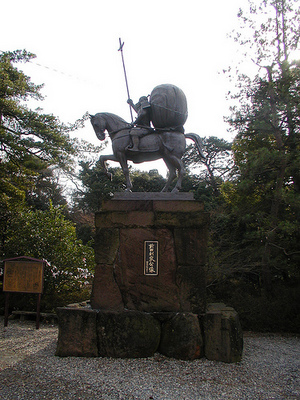 Toshiie was born in Arako Village in the Aichi District of Owari province and was the 4th son of Maeda Toshiharu. He entered Oda Nobunaga's service in 1551 as a page and eventually rose to be a commander of samurai. According to one story, he was dismissed for a time from Nobunaga's service after killing another Oda retainer but remained close to his lord. After fighting at Okehazama (1560) and Moribe (1561), we are told, Toshiie won back Nobunaga's favor and was again recognized as a retainer. He fought at Anegawa (1570) and Nagashino (1575) and was given a fief in Echizen province in 1575 (Fuchû, 30,000 koku), becoming known as one of the so-called Echizen Triumivir (Echizen sanninshu) and eventually receiving Noto province (1581). He aided Shibata Katsuie in the war with the Uesugi and assisted in the attacks on Etchû Province's Toyama and Uozu castle in 1582. He initially supported Shibata Katsuie during the Shizugatake Campaign but shifted his allegiance to Toyotomi Hideyoshi and as a reward he had the province of Kaga added to his domain. The richness of his domain was enhanced by the discovery of gold in Noto Province under Hodatsuyama in 1584. He supported Hideyoshi again in the Komaki Campaign, and in 10/1584 relieved Suemori, one of his castles which had been besieged by Sassa Narimasa. Sassa and Toshiie also clashed that year around Kanazawa in Kaga province. The following year he pushed into Sassa territory and captured Narimasa's Toyama castle in Etchû province. On 18 January 1586 (29th day of the 11th month of Tenshô, or 1585 by the Japanese reckoning) Toshiie's Etchû lands were struck by a powerful earthquake that caused much damage and resulted in the deaths of Maeda Hidetsugu, Toshiie's younger brother, and Hidetsugu's wife at Kibune castle. In fact, a further earthquake in 1596 was destined to destroy Toshiie's Fushimi castle. Toshiie served in the Odawara Campaign (1590) and then as part of Hideyoshi's headquarters staff on Kyushu during the Korean Campaigns (1592-93, 97-98). The Maeda fief was valued at roughly 445,000 koku by 1595, and Toshiie was named one of the five regents responsible for keeping the realm in order while Toyotomi Hideyori came of age. He was also named as Hideyori's guardian, a task the dying Hideyoshi pleaded with him to uphold. He honored this show of trust but fell ill and died in 1599. He was also known as Maeda Matazaemon Toshiie. His sons included Toshinaga, Toshimasa (Takamasa), and Toshitsune.

Following his death, Toshiie was deified, and enshrined as a Shinto kami. Though the Tokugawa shogunate was not yet established at this time, deification of daimyô was seen as a threat to Tokugawa authority; thus, Toshiie's deification was performed somewhat secretly (without officially informing the Tokugawa), under the guise of moving a Hachiman shrine into the Kanazawa castle compound.[1]