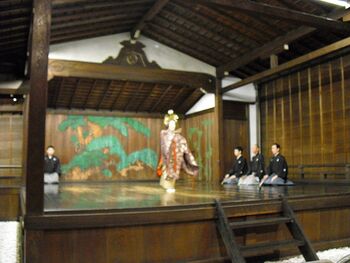 Noh is the oldest, and most elite, or culturally refined, of the major forms of Japanese traditional drama, and is said to be the oldest continuing dramatic form in the world.[1] Developed in the early 15th century, it came to be patronized by the samurai class, and especially the Muromachi and Tokugawa shogunates and provincial daimyo, becoming more widely accessible beginning in the Meiji period.

Performed painstakingly slowly, Noh focuses on conceptual and aesthetic impact, rather than lengthy or complex plots, and employs a minimum of set pieces, props, and cast members. Performance consists chiefly of two portions: utai (song/chant) and mai (dance), and while attention is most certainly paid to dramatic imitation (monomane) of the figure being portrayed (e.g. a madwoman, an old man, a deity), emphasis is placed on masterful performance of the forms, in order to effect a moving experience for the audience. Noh is also the most spiritual, or ritual, of the major traditional theatre forms, and performance is also seen as a form of meditation for the actors, and as a prayer of sorts for the spirits. 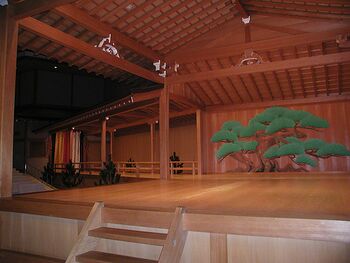 The main stage at the National Noh Theatre in Sendagaya, Tokyo.

The Noh stage, much smaller than that of kabuki or the typical Western-style proscenium stage, follows a standard design. A bridgeway (hashigakari) which provides the chief avenue for actors' entrances and exits runs at an angle, connecting with the main portion of the stage at the rear of stage right. Small pine trees typically run along the front of this bridgeway. The entrance/exit at the end is separated from backstage areas by a multi-colored curtain known as an agemaku, which is raised on wooden poles to allow actors to enter and exit.

The main portion of the stage is a square, with pillars at the four corners, and a painting of a pine tree on the rear wall. This painted pine, supposedly a reference to the Yôgô Pine (yôgô no matsu of Kasuga Shrine),[3] along with others standing along the bridge, help evoke the sense of being not in a theater, but in a natural setting, such as a forest clearing, and thus enhancing the sense of a spiritual place, where one might be visited by spirits or visions. Further, the pine, as an evergreen tree which does not lose its leaves in winter but remains strong, represents a sense of the eternal, and the notion that the very same tree might witness events in a given place over many centuries, thus linking the present of the audience to the present of the characters, and, in the case of mugen Noh, to the past (the present of the spirits' lives) as well.

While Noh is often performed in comparatively plain (but still traditional-style) clothing, in full performances, the shite performer (and sometimes others) is often dressed in oversized robes with intricate embroidered or otherwise decorative designs. Such robes, often incorporating bright colors and sometimes silver or gold thread, are lavish and expensive, and traditionally helped to not only convey the sense of a divine or otherwise larger-than-life character but also to make the actor visible from a distance in what was sometimes limited light.

Like other traditional Japanese garments ("kimono"), Noh robes are generally made to a single size; rather than different actors using different size costumes, the garments are simply folded and tucked to adjust the size. Removable collars (eri) are employed, so that a single costume might be adapted to serve multiple roles; while female roles typically wear a red collar, male roles employ a variety of colors. Aristocratic or otherwise elite characters often wear multiple collars, implying multiple layers of clothing.

The Noh mask (nômen, 能面) is a particularly distinctive feature of Noh. While not all roles or performance styles call for masks, such masks are unique to Noh and are not used in kabuki or other theatrical forms. Though these masks, carved from wood, are immobile, obscuring the actor's facial expressions, many masks - particularly those meant to depict refined young men and women - are designed so as to convey a wide range of emotions depending, simply, on how they are tilted and thus how they catch the light. Such masks, when tilted slightly downwards, can be made to appear sad, or "darkened" (kumoru); when tilted slightly upwards, the same mask can appear to smile or to otherwise "brighten up" (terasu). 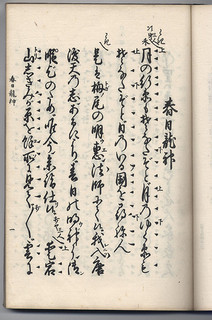 The opening lines of Kasuga ryûjin, from a Kita school utaibon published in Tokyo, 1925.

Noh is traditionally divided into five categories of plays. Each category is defined by the types of characters it features, representing different themes, but also different points in a jo-ha-kyû progression, making the categories particularly suitable for being performed in a particular sequence, from First Category to Fifth, in order, in a full program. There are roughly 240 plays in the traditional repertoire still performed today.[4]

Beyond these five categories, Noh plays can also be classified in a number of other ways. One of the chief divisions is between genzai Noh ("now" Noh), which reenact elements of famous stories, taking place during the lives of the characters, and mugen Noh (lit. "unlimited" or "infinite" Noh, referring to the unlimited depths of mystery and spiritual aesthetic), which feature spirits, (re)appearing after their demise. Some of the most famous genzai Noh are Ataka, Sumidagawa, and Hagoromo, while mugen Noh include Atsumori, Matsukaze, and Takasago. 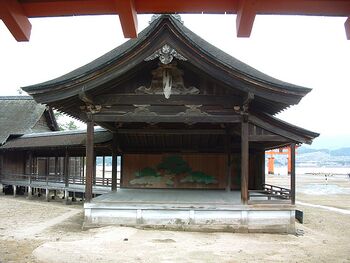 The Noh stage at Itsukushima Shrine on Miyajima, one of the oldest Noh stages in the country.

Mugen Noh often follow a certain structure, with a monk or other wanderer, played by the waki, arriving at a famous place, and commenting on its association with a famous character or story (e.g. from the Tales of Heike, Genji, Ise, or poetry) before stopping there to take a rest. He then meets a local person, such as a farmer, played by the shite, and the two discuss that famous episode. Following a kyôgen intermission (ai-kyôgen), in which a kyôgen actor retells the same story in a more lively and easier to understand fashion, the shite character reveals himself to be the spirit of the chief character associated with that place. He then dances a dance representing his emotional struggle, while the monk prays for the spirit's release. The play ends with the spirit disappearing. There is often a strong implication of the waki questioning whether his meeting the local person, and the spirit, truly happened, or was merely a dream. For the audience, too, there can be a feeling of questioning whether one merely witnessed a play, or whether the spirit manifested on the stage.

Zeami plots out an ideal Noh play in five dan, or parts. The following is a slightly lengthier and more detailed description of what is summarized above.

The chant (utai) is typically performed in lines of eight, twelve, or sixteen syllables, aligning or intentionally mis-aligning with a pattern of eight drum beats.

The musicians of the hayashi are advised in Zeami's Shûdôsho to adjust their performance to the shite actor. In Noh, as in kabuki, it is not the text which is the supreme authority as to how a play should be performed, but rather the lead actor (though the actor, of course, performs largely in accordance with tradition). The drummers are advised to adjust their playing in accord with the spirit or intent (kokoro) of the actor, and the flute player similarly adjusts his pitch in accordance with the "fragrance" of the actor's voice.[6]

Noh evolved out of an earlier dance-drama form known as sarugaku, as actor, playwright, and troupe leader Kan'ami (1333-1384) and in particular his son Zeami (1363-1443) adapted their Yamato province style of sarugaku to incorporate elements of other arts, including the sarugaku style of Ômi province, and the narrative/dance form kusemai.

Zeami claimed that the origins of sarugaku could be traced to kagura (Shinto ritual dances). He also drew upon Chinese poetry theory, gagaku musical theory, dengaku performance, and numerous other sources in explaining the origins of his Yamato sarugaku tradition, or in adopting elements from these outside sources in altering and developing Yamato sarugaku into the early form of Noh.

Zeami worked to gain the approval and patronage of Kyoto elites, believing that the fame or prestige earned in this manner was crucial to attaining fame and success in the countryside.[7] Yamato sarugaku, in the time of Kan'ami and Zeami, specialized in monomane - imitation or mimicry of characters or character types. As Zeami sought to adapt his art to make it more appealing to cultivated elite Kyoto audiences, he struggled to maintain this strength while incorporating elements such as the Ômi sarugaku focus on cultivating a mood or atmosphere of mysterious beauty (yûgen). Through the incoporation of various elements from Ômi sarugaku, kusemai, and other art forms, as well as other innovations, Zeami developed Yamato sarugaku into a form featuring lengthier narratives and deeper themes, blending monomane with yûgen and other aesthetics to achieve an artistic effect (kakari) and deeper aesthetic impact.

Kyôgen pieces, which today typically serve as the comic interlude between acts of a Noh play, are known to have been performed alongside sarugaku/Noh (i.e. on the same program) since at least the mid-14th century. Ever since then, they have become closely intertwined, and have developed to a certain extent in parallel.[8]

Zeami, along with his sons and grandsons, composed many plays which remain central to the repertoire today. His line developed into the Kanze school, the oldest of the five main schools of Noh, with the other four schools (Konparu, Hôshô, Kongô, and Kita) becoming established over the centuries, some as late as the Edo period, though all five are quite firmly established today.

Noh continued to be patronized by samurai elites through the Sengoku and Edo periods. Oda Nobunaga, Toyotomi Hideyoshi, and a number of the Tokugawa shoguns are known to have been particularly fond of the art form, even practicing it themselves. Noh remained strongest, as a result, in Kyoto and Edo/Tokyo, but it found patrons among many of the provincial daimyô as well. Many castle-towns were littered with Noh stages, and for example, Shimazu Iehisa is said to have chided his father Shimazu Yoshihiro for not encouraging Noh in Satsuma han earlier; Iehisa then invited Noh actor Nakanishi Hidenaga from Kyoto to Kagoshima, where the Nakanishi family would continue to serve as Noh masters for the Shimazu lords down through the generations. Noh performances also took place at the Shimazu mansions in Edo quite regularly, including on occasions when the Shogun paid official visits to the mansion.[9] To give another example, Udaka Michishige, a prominent Noh master active in Kyoto today is the head of a lineage of Noh masters who served the lords of Iyo-Matsuyama han in Shikoku, and Iyo-Matsuyama castle still maintains today a significant collection of Noh masks, costumes, and so forth.