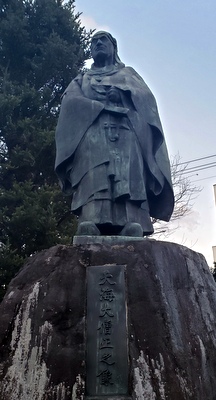 Tenkai was a Buddhist priest and prominent advisor to Shoguns Tokugawa Ieyasu and Tokugawa Hidetada. He founded a number of temples and shrines, including Kan'ei-ji and the Kiyomizu Kannon-dô in Ueno, and played a notable role in the early development of Nikkô Tôshôgû.

According to some sources, Tenkai was prominent in daimyô circles as early as the 1560s, talking with Takeda Shingen following the Fourth Battle of Kawanakajima.

Following Ieyasu's death and enshrinement at Kunôzan Tôshôgû, Tenkai managed to push Bonshun and Ishin Sûden out of accompanying him in overseeing Ieyasu's mourning ceremony at the Tokugawa clan temple of Zôjô-ji in Edo. He then also convinced Hidetada to have Ieyasu's body and spirit relocated from Kunôzan to Nikkô; Ieyasu was installed as the chief deity of a shrine at Nikkô on 1617/4/17, the first anniversary of his death.