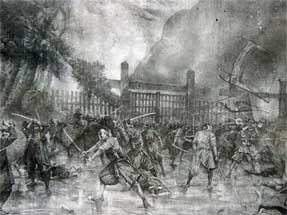 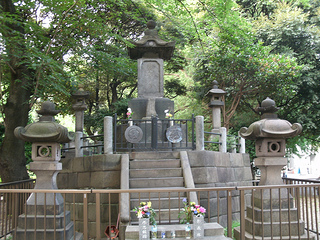 Grave of the Shôgitai, in Ueno Park.

The group was originally formed in 1868/2, by Hitotsubashi Tokugawa clan retainer Shibusawa Seiichirô, Hatamoto Amano Hachirô and 67 pro-Bakufu comrades who gathered at that time in Zôshigaya. They were first stationed at a temple in Asakusa, then moved to Kan'ei-ji in Ueno to serve as the guards of Shogun Tokugawa Yoshinobu.

The Shôgitai was destroyed by imperial troops in the 5/15 Battle of Ueno. Some members then joined other pro-Bakufu troops in the North, while other members demobilized and returned to Edo.

A tomb for the Shôgitai can be found today in Ueno Park. The smaller of the two main tombstones was erected in 1869 by a priest of Kan'ei-ji, while the larger was erected in 1874 by Ogawa Okisato, a surviving member of the group. The site was cared for by the Ogawa family for around 120 years, before it was named an important cultural asset of Tokyo's Taitô-ku (Taitô Ward) in 1990. The Tokyo Metropolitan Government took over responsibility for the site in 2003.