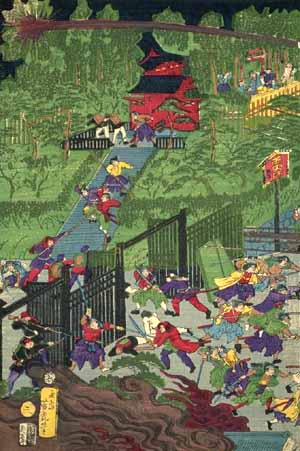 Edo castle was handed over to Imperial troops peacefully. However, many former bakufu retainers disagreed with the decision made by former Shogun Tokugawa Yoshinobu and Katsu Kaishû. They formed a group called the Shôgitai and gathered at Kan'ei-ji temple (in what is now Ueno Park).

Omura Masujiro, the commander of the Imperial troops announced that the attack against the Shôgitai would take place on the 15th day of the fifth month of the Japanese calender. As a result, almost half of the Shôgitai members deserted before that day.

The battle started at the Kuromon ("Black Gate") of Kan'ei-ji, which was being guarded by 450 Shôgitai members. A famous statue of Saigo Takamori stands on this spot today. The Imperial troops attacked from the front of the gate and from behind the temple, attacking the temple directly with thirteen cannon based within the Edo manor of Kaga han (today the main campus of Tokyo University). The Shôgitai was destroyed in a day.

The Kuromon can be found today in Entsu-ji in Arakawa-ku.

This article is a rough draft which is in need of cleanup (grammar, spelling, corrections, links, formatting, etc.). You can help SamuraiWiki by editing it. Click here for a list of articles that have been tagged as a draft copy.
Retrieved from "http://samurai-archives.com/w/index.php?title=Battle_of_Ueno&oldid=22006"
Categories: