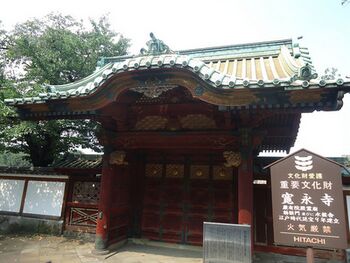 Tokugawa Ietsuna was the fourth shogun of the Tokugawa shogunate, ruling from 1651/8/18 until his death on 1680/5/8. He was the eldest son of third shogun Tokugawa Iemitsu.

Ietsuna became shogun in 1651, at age 11, following his father's death; he was advised by his uncle Hoshina Masayuki until he came of age eight years later, in 1659. In 1679, the year before his death, Ietsuna appointed Hotta Masatoshi Tairô (chief of the rôjû; chief shogunal advisor). Ietsuna was frequently ill, and various high-ranking retainers performed much of the work of administration and governance on his behalf, at times. Particularly prominent among these officials was Tairô Sakai Tadakiyo.[1]

His concubines included Ofuri-no-kata; Ietsuna died with no heir, however, and was succeeded by his younger brother Tokugawa Tsunayoshi. He was buried at Kan'ei-ji; while parts of his tomb, along with that of Tsunayoshi, were destroyed in the Meiji Restoration, and again by Allied bombing in 1945, the formal gate and handwashing station at Ietsuna's tomb survive. Both are today considered Important Cultural Properties. A plaque written by the Emperor himself also survives, and hangs from the gate. This gate was originally the gate for his father's tomb, but it was repurposed around the time of Ietsuna's death.[1]