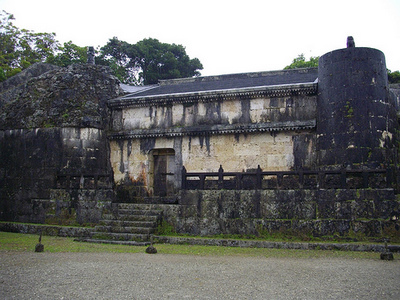 The main building at Tamaudun.

Tamaudun is the royal mausoleum of the Ryûkyû Kingdom. It was originally built in 1501 by King Shô Shin to house the remains of his father, King Shô En; the inscription on a stele erected in the outer courtyard of the site indicates that the mausoleum is to house the remains of eight figures in particular - Shô En's queen Yosoidon; his eldest daughter Gessei; Shô Shin's eldest daughter; and his third through seventh sons - and their descendants. Conspicuously absent are Shô Shin's uncle and predecessor, Shô Sen'i, and Shô Shin's children by his first wife, Kyojin; such omissions contributed to the legitimation of a more consolidated, reduced, royal lineage, and the delegitimation of other lineages, strengthening the "main" lineage's monopoly on power and reducing potential for uprisings or division.[1] The mausoleum's name was originally written with different characters, 魂殿, meaning "palace of the spirits."

The mausoleum is located a short distance to the west of Shuri castle, and has been designated a National Treasure,[2] as well as being included alongside Shuri and other gusuku (Okinawan castles) in the 'Gusuku Sites and Related Properties of the Kingdom of Ryukyu' World Heritage Site.[3] The compound consists of three chambers in one large stone building carved directly into the limestone bedrock, and topped with stone guardian statues. The stone roof is meant to resemble or evoke the shape of traditional thatched roofs. Access to the main building is through a pair of courtyards, each defined by rough limestone walls, and each with a single gate in a distinctive Okinawan style. A stele in the outer courtyard, erected at the time of the mausoleum's construction, states the provisions for being entombed at Tamaudun, and lists nine names, including that of Shô Shin.

The kings and queens of the Ryûkyû Kingdom are entombed in the eastern chamber, along with a number of crown princes and princesses. Other members of the royal family are entombed in the western chamber, while the central chamber was not intended for permanent entombment, though a single funerary urn containing an unidentified individual's remains does remain there.[4] Rather, the central chamber was used for the senkotsu ritual. As in traditional Okinawan commoners' funerary ritual, after death a body was placed in the central chamber until all that remained was bones; the bones were then ritually washed, and placed in a funerary urn which would then be entombed permanently in the western or eastern chamber.

Following Tamaudun's completion, Shô En's remains were moved there from a site called Miagimui (見上森), where he had been originally entombed. Every King of Ryûkyû from Shô En onwards is entombed at Tamaudun, with one exception. Shô Nei (r. 1587-1620) requested to be buried elsewhere, allegedly because he felt he had dishonored his ancestors by allowing Ryûkyû to fall to Japanese invasion in 1609. Shô Nei was instead entombed at Urasoe yôdore alongside Eiso and two other 13th-14th century kings of Okinawa.

Crown Prince Shô Ten was the last person to be entombed in Tamaudun. His funeral was held September 26, 1920.[6] The two guardhouses served as anterooms for monks and family members during the funeral.[5]

The compound took considerable damage in the 1945 battle of Okinawa, but survived mostly intact, and underwent repairs in 1977. The structure survives today, though the stone has been significantly blackened, not primarily by the bombing, but simply by age. Today, a visitor center near the entrance to the compound includes a small permanent exhibit gallery with models of the mausoleum, describing its history and layout.