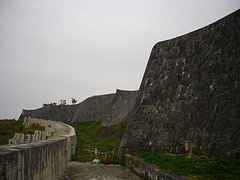 One section of the winding walls of Shuri castle. 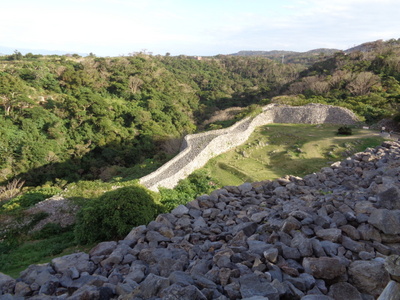 Gusuku are Okinawan castles or fortresses and sacred sites. Known especially for their long, winding stone walls, the height of gusuku construction was in the 14th century, a time of conflict on Okinawa Island. Five are included alongside a handful of other Okinawan sites in a single group World Heritage Site as "Gusuku Sites and Related Properties of the Kingdom of Ryukyu."[1] Though some three hundred or so gusuku sites are known throughout the Ryukyu Islands chain,[2] the vast majority are today in ruins; only Shuri castle has been reconstructed.

Gusuku varied widely in size and scale, ranging from only 100 square meters to 20,000, with the largest gusuku presiding over complexes as large as 40,000 square meters in area. While the largest gusuku can be compared to the fullest sorts of castles, with a main keep, residential and administrative palace structures, multiple courtyards, moats, gates, and so forth, some were little more than hilltop encampments surrounded by a single stone or earthen wall. While many (but not all) served to one extent or another as the residence of a local lord or as a center of political power otherwise, all gusuku included sacred sites within their walls.[3] While there has been much scholarly debate as to whether gusuku, categorically, should be understood primarily as settlements/villages, fortresses, or sacred sites, the reality seems to vary from site to site, and over time.[4]

While the etymology of the term remains unclear, Ifa Fuyû suggested it be understood as a reading of 御塞 (gusuku, gushiku, usuku, ushiku, or in standard Japanese: osoku), meaning a block or an obstacle, and thus a meaning akin to fortress.[5]

The Gusuku period of Okinawan history takes its name from these fortresses, which were at their peak at that time.

Local power-holders known as anji - who might be understood as chiefs, village heads, local lords, or by a number of other descriptors - first began to emerge in the 8th to 10th centuries. Communities became more organized and began to emerge as distinctive locales, building walls or other fortifications separating their villages from wilderness, and from one another. Though today, especially in standard Japanese or in English, the term "gusuku" is used almost exclusively to refer to a specific type of fortress, placenames preserve the fact that the term originally referred to villages, and was later used to refer to a wide variety of structures, including guardtowers and warehouses, places of worship, and tombs. Today, there are over 300 places on Okinawa which are called gusuku,[6] including a number of villages or neighborhoods not directly evidencing a fortress site; a number of neighborhoods, villages, or locations otherwise in the Amami Islands and Sakishima also bear placenames containing the sounds "gusuku," "suku," and "shuku."[5]

Settlements incorporating embedded-pillar buildings, tombs, and fields, became quite numerous across the islands in the 12th-13th centuries. Gusuku construction then developed further in the 13th-14th centuries as a few powerful anji emerged, seeking to expand their power, and fueling a period of armed conflict. They built new buildings with pillars on stone foundations, and encircled the settlements in high stone walls and waterless moats, transforming them into fortresses.[7] Most of the largest and most famous Ryukyuan gusuku fortresses, and those with the most impressive stone walls, date to this period. Gregory Smits identifies this period of the initial widespread construction of gusuku on Okinawa Island and Kumejima with the political and economic center of gravity in the Ryukyu Islands shifting from the Amami Islands (esp. Kikaijima) to Okinawa in the 13th-14th centuries.[8]

Like castles around the world, gusuku were not merely military fortifications, but residences for the powerful, and symbols of power, prestige, and wealth. Shô Hashi established Shuri castle as his palace, and the center of political & administrative affairs for the kingdom, while other gusuku, such as Nakijin gusuku, the largest on the island, had already been used by the lords (kings) of Hokuzan as a sort of palace as well. The spiritual or sacred aspect of gusuku should not be overlooked, however. While most Japanese castles, built originally as political and/or military centers, had Shinto shrines established within their grounds, most if not all gusuku had roughly the reverse origins, with communities or power centers growing up around sacred sites (utaki) and then developing over time to become more heavily fortified and greater centers of martial and political power.[5]

Many gusuku continued to be occupied and used by anji under the Ryûkyû Kingdom, who served as local administrators. Many others, presumably, fell into disuse, however, in the 17th-19th centuries, and all suffered extensive damage in the 1945 battle of Okinawa. Some have since been named World Heritage Sites, and many more have become public parks or the like.

Perhaps because so many are in ruins, the aspect most strongly associated with gusuku is their long, snaking stone walls. Aside from their overall long, snaking form, a few features of gusuku walls stand out. First, the gates are essentially gaps in the stone, filled in with wooden gatehouse structures, most often simply extended across the top of the opening, with heavy doors below. Though these gatehouses were often equipped with arrow-ports and gunports (see firearms in Ryukyu), the walls themselves were not, and lacking anything on the wall for defenders to hide behind while they fired on attackers, many were quite easily cut down by gunfire in the 1609 invasion of Ryûkyû by samurai from Satsuma han, for example.[9]

The walls themselves were constructed in a number of different ways, quite similar to those employed in Japanese Azuchi-Momoyama or Edo period castles a few centuries later. Earlier gusuku such as Gushikawa gusuku and Tamagusuku gusuku reflect the Nozura-zumi style, in which uncut rocks were simply piled. Cut, rectangular stones were used in the Nuno-zumi style, which can be seen at, for example, Itokazu gusuku. The Kikkô-midare-zumi technique, in which stones were carefully carved and fitted, was used to make the elegant curves for which some of the most famous gusuku are known.[6]

Gusuku were organized in a variety of different ways, as best suited their geography, but most featured a sacred grove (utaki) alongside the lord's residence in the innermost bailey, or unaa (御庭), at the highest point of elevation within the space. Okinawan villages were organized similarly, with the village headman's home located at the highest point up a hill, below an utaki.[10] Shuri castle, for example, is organized in a roughly concentric format, with each set of walls surrounded by another, larger, set of walls. Those entering the castle make many turns as they pass through each gate, moving further towards the center. By contrast, Nakijin castle followed a more stepped layout, with the innermost sections of the castle - the lord's residence, and a sacred grove - at the top of the hill, the path there from the outermost gates following a more or less straight path up the hill, through one gate after another.