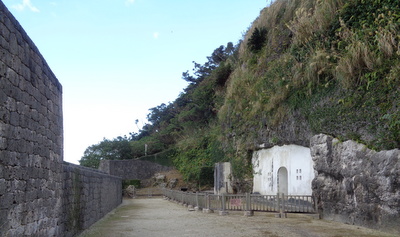 The entrance (in white) of the tombs of Eiso and two of his successors, at Urasoe yôdore

Eiso was a prominent local powerholder on Okinawa Island in the 13th century. Traditional histories describe him as an early king of Okinawa as a whole, who united parts of central and southern Okinawa and established the capital at Urasoe. He is sometimes identified as the first historical king of Okinawa, with all those before him seen as legendary.[1] However, in recent years scholars questioning the unity of Okinawa in any period prior to around the 1550s have pointed to the rise of Katsuren around this time as a major economic center in the region (and the concurrent decline of Kikaijima and the northern portion of the Ryûkyûs in general as a notable center), and have suggested that Eiso could not have been more than a local or regional power-holder.[2]

Eiso is said to have been born at Iso gusuku. His reign is traditionally said to have lasted from 1260 to 1299, marking the beginning of a new dynasty after the previous king, Gihon, went into exile.

He established the royal mausoleum at Urasoe yôdore in 1261, and is entombed there alongside two other medieval Okinawan rulers.