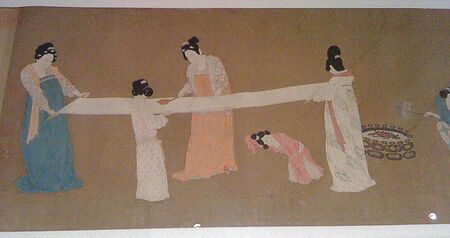 Silk was one of the most prominent materials both produced in Japan and imported from China and elsewhere, and an expensive, luxurious, but very widely used material throughout Japanese culture, being used not only in garments, but in bookbinding, as ground for paintings and calligraphy, as well as for curtains and a wide variety of other objects.

Silk production is one of the classic examples of cottage industries and by-employments that constituted Edo period proto-industrialization, while the great Japanese demand for the import of silk, largely in exchange for the export of silver and copper, and later of marine products, was a major driving force in foreign trade concerns and policies. By the 19th century, Japan had become a major producer of silk, and the European and American demand for Japanese silk became a major element of foreign trade considerations.

It took roughly 35,000 cocoons to make twelve pounds of raw silk. That many cocoons would grow out of roughly one ounce of eggs, but would require one ton of mulberry leaves to be fed on.[1]

Silk thread and fabric is made from the fibers of silkworm cocoons. Silkworms are raised on mulberry bushes, and their cocoons are collected to be treated, unraveled, and re-spun into thread.

A single cocoon can result in as much as 700 meters of silk thread. Kiito 生糸 (raw thread) is made by spinning thread directly from boiled cocoons, while Tsumugi ito 紬糸 is made by boiling the cocoons longer, such that they meld together into a mush or a film which can then be pulled and spun into cloth.[2]

According to legend, silk was first discovered by Empress Leizu (嫘祖), around 2650 BCE. As the story goes, a silkworm cocoon fell into her tea cup, and began to uncurl; the empress then found that when she spun the threads, they produced a soft and strong cloth.[1]

Archaeological research has found, however, evidence of sericulture going back as far as six or even seven thousand years in China.[1]

Importation of Silk into Japan

Silk was a major Chinese export going back many centuries, as far back as the Han Dynasty. It was so prized that for a time, the process of producing silk was regarded as secret, and the penalty for trading in such secrets was death. Still, by circa 140 CE, the Han court lifted bans on exporting silk beyond the empire's borders, and it quickly became so prominent among trade goods throughout the region that the network of trade routes linking China with central and western Asia had come to be known as the "Silk Road." Silk very soon began to reach as far away as Rome.[1]

By the 11th century, porcelain replaced silk as China's chief export,[3] but the volume of silk exported nevertheless remained quite considerable. Throughout the 19th century, tea and silk constituted the vast majority of China's exports, the two goods combined accounting for as much as 92-93.5% of Chinese exports in the 1840s-1860s, though this figure dropped to 64.5% in 1890. As late as the 1920s, roughly 50-70% of the silk produced in China was produced for export.[4]

Though a great simplification of the great many types of goods that were exchanged throughout the region, it has been argued that the East/Southeast Asian trade routes, dominated by the Chinese, into which the Europeans inserted themselves in the 16th-17th centuries, was predominantly a system of bringing Japanese and New World silver into China, and Chinese silk into Japan.[5] In the Azuchi-Momoyama period, as the archipelago began to see some degree of peace and stability, and as some daimyô and merchants grew particularly powerful & wealthy, demand for high-end silks, including brocades and embroideries, flourished. Daimyô demanded high-quality silks for their own garments, and those of their retainers, embroidered with the family crest, as well as lavish garments for the ladies associated with their courts.[5] Toyotomi Hideyoshi's gold-covered tea room stands as an example of the incredible levels of opulence which typified the uppermost layers of Japanese society at this time; the expensive architecture and interior decor of the likes of Azuchi and Momoyama castles were accompanied by similar opulence in textiles, lacquerware, and the like.

Japanese demand for silk was such that in the brief period of roughly 1590-1640, when Japanese overseas activity was at its peak, Japanese purchases of silk in the Vietnamese port of Hoi An were of such a great volume that they caused dramatic cyclical swings in market prices, frustrating the Dutch, who were left with less volume available for purchase, and at much higher prices.[6]

In the 17th century, the Tokugawa shogunate tested out a variety of policies in efforts to stem the tide of silver exports. The 1655 abolition of the itowappu silk monopoly, established in 1604, was one such effort, but it backfired; the free competition that emerged after the dissolution of the monopoly caused silk prices to rise, which only served to increase the amount of silver leaving the country for the same amount of imported silk.[7] During this time, Japanese domestic weaving techniques were inferior to those in China, or elsewhere in the region, and so imported Chinese and Southeast Asian silk remained in high demand. Bans and restrictions on castle expansions & repairs, and on other forms of military spending, caused the daimyô to divert even more of their funds into fancy garments, whether as a means of displaying wealth and status, or out of simple desire and fashion taste.[8] 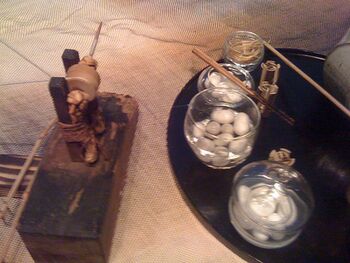 Silk cocoons being prepared for spinning.

Over the course of the Edo period, textile merchants based in the Nishijin district of Kyoto extended their control over the silk industry, at least in central Japan, establishing vertical organizations in which a given Nishijin merchant claimed within his operation silkworm farms, spinners, weavers, and dyers, as well as transportation, marketing, and wholesale and retail operations. Many of these families, or the firms they established, continue to hold prominent places in producing the highest-quality silks and kimono today. It is estimated that at its height in the Edo period, Nishijin's textile industry may have employed as many as 100,000 people, including weavers, spinners, dyers, and others. There were at this time roughly 7,000 takabata "high looms," which were used to produce the highest quality textiles, and which required two operators at a time; most textiles were produced using the single-operator hirahata, or "flat looms."[9] By the 1720s, roughly 90% of silk processing in the archipelago was done in and around Kyoto.[10]

Being associated with wealth and luxury, silk was regularly prohibited by the shogunate from being worn by commoners, as part of repeated issuances of sumptuary regulations. Chônin generally skirted these regulations, however, covering up their silks under rougher garments in public, and/or wearing more lavish garments only in private. Many garments were also made of lesser materials, but with lavish inner linings.

By the 1760s, Japanese domestic production of silk had grown to such a point that the realm was able to actually begin exporting silk, and importing gold and silver, reversing the flows which had so concerned the shogunate a century earlier.[11]

Japanese silk production first appears in Western records in 1859. In that year, Italy is said to have been producing five times as much raw silk as Japan, and China ten times as much. Japan's production expanded quickly, however, growing five-fold by 1862, just as French and Italian silkworm cultivation was ravaged by disease. Fifty years later, in 1912, Japan was the top exporter of silk in the world, and by 1938, roughly four-fifths of world silk production was controlled by Japan. In total, roughly half of Japanese exports in the Meiji period were textiles or textile-related products.[12] And roughly one-quarter of the silk production in the country was in Nagano prefecture.[13] Where Edo period silk production is often lauded as an example of Japanese proto-industrialization, contributing to great improvements in livelihoods for those who engaged in such activities, Meiji period industrial factory production of silk is often pointed to as representative of the grueling and oppressive conditions under which factory workers (in the case of silk mills, often chiefly young women) were forced to work, very long hours, for little pay. The Tomioka silk mill laborers strike of 1898 is a particularly famous example of numerous such incidents; the 1979 film Aa, Nomugi toge ("Ah! Nomugi Pass") presents a fictionalized account of the experiences of such silk mill workers circa 1900-1905.