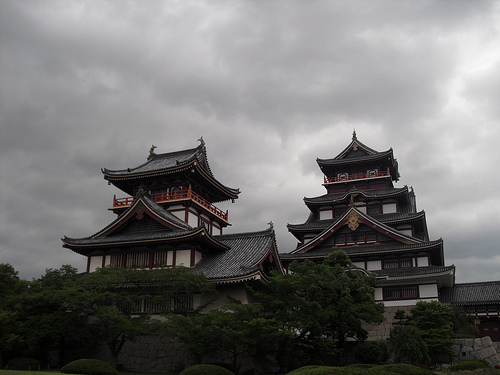 Fushimi castle, as reconstructed in the 20th century.

Fushimi castle, also known as Momoyama or Fushimi-Momoyama castle, was built by Toyotomi Hideyoshi in Fushimi, in southeastern Kyoto, to serve as his retirement palace.

Hideyoshi began construction on the first Fushimi castle in 1592, and famously incorporated a tearoom covered from floor to ceiling (and all the tea implements as well) in gold foil.[1] This tearoom seems to have been movable, and was constructed no later than the early months of 1586, when a record shows it was set up at the Imperial Palace to be shown to the emperor and courtiers. It was then set up again shortly afterward at Osaka castle, and may have been erected at the Jurakudai at times.[2] Though the golden tearoom is often described as an example of the vulgarity and excess of his cultural taste; however, Morgan Pitelka suggests this is not dissimilar from Ashikaga Yoshimitsu's Golden Pavilion, and the extensive use by samurai elites of gold foil in paintings, lacquerware, and the like.[3]

Hideyoshi expanded the castle in 1594 in order to formally receive envoys from Ming Dynasty China. It is said that he mobilized 250,000 men to serve as workers for the expansion, and dismantled the nearby Yodo castle to use its stone in the construction of Fushimi castle's walls. In 1596, he received a vice-envoy from Ming, but just before the chief envoy arrived, there was a great earthquake, and the castle was destroyed. Hideyoshi then rebuilt the castle roughly 500 meters to the north of the original site.

The castle fell to the forces of Tokugawa Ieyasu prior to the battle of Sekigahara, but was rebuilt by the Tokugawa in 1604; Ieyasu then lived there until 1607, when he retired to Sunpu.[4] For a brief time, the castle fell under the control of Yodo han, but then in 1623, Shogun Tokugawa Iemitsu had it demolished, using materials from the dismantled castle to build a new castle at Yodo for the lord of that domain.[5] Many architectural elements of the castle survive today, having been incorporated into shrines, temples, and other sites, including Daitoku-ji and Nijô castle.[1]

The Meiji Emperor was buried on the original site of Fushimi castle, but the castle was rebuilt a short distance away in 1964. It served as the centerpiece of an amusement park for nearly 40 years; the amusement park was shuttered in 2003, and the site reopened as a public park in 2007. Though the interior of the castle was open to visitors for a time, it is now closed to the public.