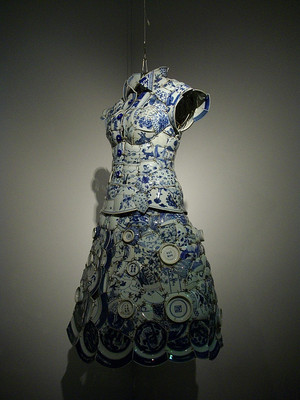 Porcelain is a particularly fine form of ceramics, known for its clean white color; smooth, glass-like texture and sheen; light weight; and for its ability to be made extremely thin. Along with silk, it was one of China's most prized exports for centuries, and a major element of its export trade revenues, becoming so highly prized and so highly associated with China in the West that porcelain wares came to be known popularly as "china."[1]

The production of porcelain requires particular materials, including a white clay known as kaolin, and like any form of ceramics, a very particular set of firing conditions, including temperature and so forth. For many centuries, this technology was jealously guarded by China, with porcelain being produced nowhere in the world but China, Korea,[2] and Ryûkyû[3] up until the early years of the 17th century, when it first began to be produced in Japan. Europeans, working from the finished product, attempted through trial-and-error to determine the process, producing imitations in Delft wares in the Netherlands, Meissen wares in Germany, and Worcester wares in Britain, but were not successful until the 18th century. Still, the decorative designs they produced were eventually reproduced in China, for sale to the export (Western) market, so in a sense the blue and white porcelain patterns wildly popular throughout the world are not purely a product of Chinese creativity, but of interchange between China and the West.[4]

First developed during the Northern Song Dynasty (or, perhaps as early as around 600 CE)[5], porcelain quickly came to replace silk as China's chief export, doing so as early as the 11th century,[6] though in later centuries silk would surpass it once again, with tea being another extremely major export, especially by the 19th century. Blue and white (C: qīngbái) porcelain, decorated with cobalt blue, was likely first developed at the kilns at Jingdezhen in the Yuan Dynasty (1279-1368).[4] These didn't see widespread popularity until a century or so later, but they then went on to become the most classic, or stereotypical, widely known style of porcelains, at least in the Western imagination. As cobalt mined in China produced a somewhat duller color, imported cobalt from the Middle East or Central Asia was used for the highest quality porcelains. After the dish was shaped, it would be allowed to dry, then painted using ground cobalt suspended in water, or other pigments; a clear glaze was then applied, and the items were fired, typically in a wood-burning kiln, at around 1200 C. When fired, the cobalt material turned a brilliant blue, with the deepness of the hue depending on how thoroughly it diffused into the transparent glaze of the porcelain.[7]

The Ming Dynasty was perhaps a high point in the production of porcelain, from a connoisseurial / art history perspective at least, and the "Ming vase" remains a stereotypical example of extremely valuable objects in popular culture (at least in the United States, e.g. on television sitcoms and elsewhere) today. The reign of the Yongle Emperor (r. 1402-1424) is known for its white porcelain wares, while that of the Xuande Emperor (r. 1426-1435) is cited as seeing the rise in popularity of blue-and-white porcelain. Under the Zhengtong Emperor (r. 1435-1449), private sales of blue-and-white porcelain were banned, and its production and sale was placed under an Imperial monopoly. One of the chief kiln sites was at Jingdezhen in Jiangxi province, and works from there are still highly valued today. By the end of that century, however, the monopoly had significant leaks, and blue-and-white porcelain was beginning to be exported in considerable volumes, including to the Netherlands (and elsewhere in Europe), and to Persia, where blue-on-white ceramics were first developed.

Five-color enamels became a prominent style under the Chenghua Emperor (r. 1465-1488), and indeed the styles changed with each reign, but blue-and-white always remained (or returned to being) dominant.

Simple white porcelains were highly prized in Joseon Dynasty Korea. Made with a feldspar glaze and fired at around 1300-1350 C, white porcelain is said to have been the most advanced type of porcelain in terms of its hardness.[8]

The first porcelain kilns in Japan were established by a Korean potter, Yi Sam-pyeong (J: Ri Sampei, 1579-1655), who also brought the beginning of Arita wares.[9] The Nabeshima clan lords of Saga han made their domain a prominent center of porcelain production, maintaining an official monopoly on Nabeshima wares, and from 1805, Imari porcelain.