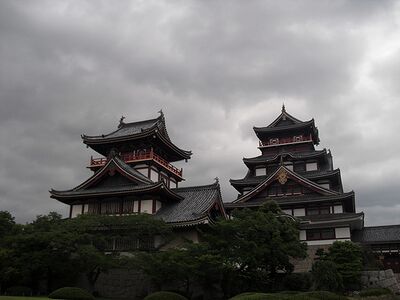 Period of rule by Oda Nobunaga, whose seat was Azuchi castle in Ômi province, and by Toyotomi Hideyoshi, whose final seat was Fushimi castle in Momoyama, Kyoto.[1]This was the period llinking the free-for-all wars of the Sengoku Period, and the very stable Edo Period, the period when Nobunaga gained control of central Japan and Hideyoshi unified all Japan with the destruction of the Hôjô clan of Odawara in 1590. It ended with the transfer of power from the Toyotomi clan to Tokugawa Ieyasu.

The period is considered to start either with Nobunaga's entry into Kyoto in 1568 or with his expulsion of the last Ashikaga shogun and the end of the Muromachi Period in (1573). Major events include Nobunaga's death in 1582, Hideyoshi's conquering Kyushu (1587), his unification of all Japan with the destruction of the Hôjô clan of Odawara in 1590, and his invasion of Korea (1592-1598). The end of the period was marked by three major events: Ieyasu's victory at the Battle of Sekigahara (1600), the establishment of the Tokugawa bakufu (shogunate) (1603), and the final destruction of the Toyotomi clan during the Osaka Campaign (1615) . It was followed by the Edo Period.

Europeans first arrived in Japan around 1542, and Francis Xavier in 1549, but by the Azuchi Period the arquebus (a type of matchlock musket) was becoming a major combat weapon. (See teppo.) Nobunaga was very interested in things European, and both Hideyoshi and Ieyasu placed high importance on foreign trade. This was also the most flourishing time for Christianity in Japan. Though Hideyoshi promulgated anti-Christian edits in 1587 and 1596 it was not seriously repressed until 1613.

This period is marked by some flamboyance in dress and architecture. Roughly one hundred major castles were constructed between 1596 and 1615;[2] following upon the precedents set by the castles at Azuchi and Fushimi-Momoyama, these new structures included numerous novel features today powerfully associated with Japanese "traditional" castle architecture. Extensive stone bases were among these features, along with the fundamental idea of combining military strength and lavish decoration; these castles were not only military structures, but also served as elite residences, their design representing both the wealth and power, and personal cultivation & elite taste, of their lords. Perhaps the most dramatic innovation of this period was the advent of the "tower keep" (tenshukaku 天守閣); among the keeps from this period, the ones of Matsumoto castle, Hikone castle, Inuyama castle, Himeji castle, etc. are still standing. Even though defense was important, appearance was also important. Hideyoshi's Fushimi Castle had tiles covered with gold foil, and ones of the same pattern have been found in Ueda castle. The Chinese-style roof of gates (kara-mon) was used in places as Nijô Castle. In clothing, the large designs that we see in examples and pictures of clothing are in contrast to the subdued Edo-period clothing

Even though the period lasted less than 50 years, it is one of the most popular in Japanese history. For example, of the 47 NHK Taiga Dramas, in 14 of them, a substantial portion of the action takes place in that period, and 3 more dramas either begin or end in it.