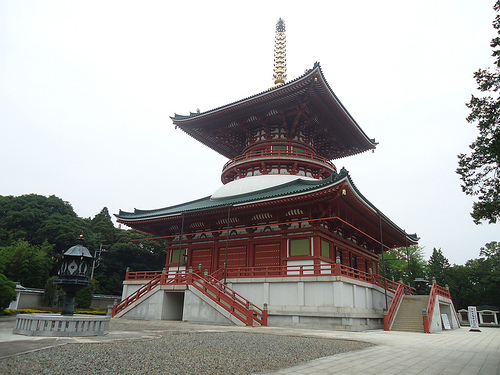 The Peace Tower at Narita-san

Narita-san Shinshô-ji is a Buddhist temple in Narita, Chiba prefecture. The patron temple of the Ichikawa family of kabuki actors, it is chiefly dedicated to the deity Fudô Myôô, and is famous for its ogoma fire rituals.

The head temple of the Chisan branch of Shingon Buddhism, its chief object of worship, a grand statue of Fudô Myôô, is said to have been dedicated by Kûkai himself, at the request of Emperor Saga. The sculpture was originally enshrined at Jingo-ji on Mt. Takao, but, during the rebellion of Taira no Masakado in 939, at the request of Emperor Suzaku, the monk Kanchô fled with it to the Kantô, and at Narita in Shimousa province, stopped and performed an o-goma fire ritual for 21 days. At the end of the 21 days, the rebellion was ended, and Kanchô established a new temple on the spot, dubbing it Narita-san Shinshô-ji (lit. "new victory temple").

The temple complex occupies an extensive area of land, and contains a considerable number of halls and structures.

Perhaps the most famous and iconic structure associated with the temple is the massive 58m tall "Peace Tower" (heiwa daitô) which stands atop the mountain, high above the remainder of the complex. Built in 1984 on the occasion of the 1150th memorial service (1149th anniversary of the death) for Kôbô Daishi (Kûkai, founder of Shingon Buddhism in Japan), it houses a six-meter tall image of Fudô Myôô, alongside sculptures of the other four Wisdom Kings (Myôô), as well as a number of other smaller images, mandala, and sutras from China, India, and beyond. The bottom floor of the structure, known as the Reikôden, contains an exhibition on the history of the temple, and a workshop where monks work to copy sutras; finally, a time capsule containing messages of peace is buried underneath the tower, to be retrieved in 2434, on the occasion of Kûkai's 1600th memorial service.

The temple's main gate, most recently rebuilt in 2008, is about 15 meters tall, and features wooden carvings of the twelve signs of the zodiac on its kaerumata (decorative roof beams). The gate also serves as a storehouse for eight Buddha statues.

The Niô-mon ("Two Kings Gate"), also known as Shitenmon ("Four Gods Gate") for the four sculptures installed there, was most recently rebuilt in 1830 or 1831. An Important Cultural Property, the gate is constructed in the irimoya style, with copper roof shingles, and a chidori-hafu gable in the front, and noki-kara-hafu on the rear side. In addition to the Niô (aka Kongô Rikishi), the eight-pillared gate houses sculptures of Tamonten and Kômokuten.

The temple's chief pagoda, a three-story 25m tall tower, dates to 1712 and has been designated an Important Cultural Property. It contains images of the Five Wisdom Buddhas (gochi nyorai), and is surrounded by sculptures of the Sixteen Arhats by Shimamura Entetsu.

A tower known as the Kôrinkaku, built in 1975, serves as the main administrative offices for the temple, and contains a 480-tatami reception hall for formal guests. The Shôtoku Taishi Hall (Shôtoku taishi dô) on the grounds is also quite new, having been completed in 1992.

One of the temple's sutra repositories, located just to the left of the bell tower, and known as the Issai kyôzô, dates back to 1722. The bell tower (shôrô) itself dates to 1701; the bell, restored in 1968 by Katori Masahiko in conjunction with the 1964 construction of a new hondô (Main Hall), weighs 1,068 kg.

A series of grottoes cut into the rock wall behind the main hall house small bronze statues of the eight disciples and 36 disciples of Fudô Myôô. These are accompanied by stone slabs inscribed with the names of individuals and organizations which have made sizable donations to the temple. One of the largest caves, known as the Oku-no-in, houses an image of Dainichi Nyorai; inscriptions on one of the stone slabs at the entrance to this cave date it to 1336.

A small shrine to Benzaiten (Benten), dating to the Genroku period, is considered the oldest structure on the grounds; a Tenjin shrine erected in 1887 also stands in the grounds. Another shrine on the grounds, originally dedicated to Shusse Inari, is now known as Dakiniten-dô, as it houses a sculpture of Dakiniten gifted to the temple by Inaba Tango-no-kami Masatomo, lord of Sakura castle, in the early 1700s.

The Kômyô-dô, originally the main hall of the temple, is now a secondary hall, located off in one corner of the grounds. Originally built in 1701, it was significantly repaired in 1768, then moved in the 1850s behind the Shaka-dô, which at that time became the main hall; when the current main hall was constructed in 1964, the Kômyô-dô was moved again, to its current location. A good example of mid-Edo period architecture, the 15 meter high irimoya-roofed building remains largely in its original form, albeit with the outer veranda and flooring of its outer hall removed; the hall, today designated an Important Cultural Property, houses an image of Dainichi Nyorai as the chief object of worship, alongside images of Fudô Myôô and Aizen Myôô.

The temple's gakudô, also an Important Cultural Property, stands next to the Kômyô-dô. This is where plaques (gaku), votive plaques (ema), and the like donated by worshipers are kept and displayed. The structure takes the form of an elevated storehouse, with an open area underneath. Constructed in 1861, the gakudô also houses a statue of kabuki actor Ichikawa Danjûrô VII, a bronze globe, and a number of other objects of significance, while other historical objects associated with the structure are now stored in the Reikôkan. This is in fact the temple's second gakudô; an earlier one, located behind the pagoda, was originally donated by a member of the Ichikawa family of kabuki actors, but burned down in 1965.

The Shaka Hall (Shaka-dô), also designated an Important Cultural Property, served as the main hall of the temple from its construction in 1858 until 1964. It houses a statue of Shaka as the chief object of worship, along with images of the bodhisattvas Fugen, Monju, Miroku, and a Thousand-Armed Kannon. Sculptures of the 500 arhats and of the 24 Paragons of Filial Piety surround the hall.

A "Founder's Hall" (kaizandô) honoring the temple's founder Kanchô was constructed in 1938, in celebration of the 1000th anniversary of his establishing the temple in 940. Meanwhile, one the temple's chief hidden Buddhas, an image of Daishô Kangiten, is housed in a small structure known as the Shôtendô.

An expanse of sacred woodland extending to the east of the temple's main garan is organized around a hall known as Senshindô, where monks can engage in ascetic practices and training. The area is also home to two waterfalls, known simply as the "male flying" and "female" waterfalls, and to a Waterfall Fudô (otaki fudô son) enshrined at the top of the falls.

These woods are adjacent to Narita-san Public Park, which covers an area of 165,000 square meters, and which leads to or from the great Peace Tower. Originally built in 1928, and considerably renovated in 1998, the park contains a garden in a distinctively early 20th century European style, with carefully arranged flowerbeds arranged around a fountain. Other areas of the park feature a large pond, tearoom, calligraphy museum, and stelae celebrating famous calligraphy and poetry.