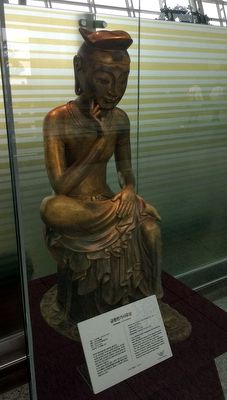 Miroku is the Japanese incarnation of the bodhisattva known as Maitreya in Sanskrit. Worshipped as the Buddha of the Future, the entity who will usher in a new age of peace & enlightenment when he becomes Buddha in the future, Miroku is among the more prominent Buddhist deities in Japan.

A 7th century wooden sculpture of Miroku held at Kôryû-ji in Kyoto is particularly famous as the first object in Japan to have been designated a National Treasure.

Maitreya (C: Mílè) is also prominent in China, famously appearing, for example, in the Three Buddhas Cave at Longmen, a rare instance where Maitreya is the central figure in a triad. 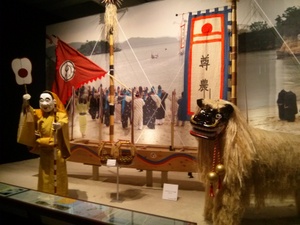 Miroku is perhaps the most commonly worshipped deity in the Ryukyu Islands, especially the Yaeyama Islands,[1] where he is known as Miruku. A figure dressed as Miruku is a common feature of many island festivals, in a long yellow robe and large white mask, and carrying a duck-web fan; this form or appearance for Miruku is the result of influence from the form of the deity Budai (J: Hotei) as imagined/depicted in Southern China.[1] In many of these festivals, the god is believed to come from across the sea, from nirai kanai, and comes ashore bringing yugafû (good fortune). The arrival of the deity is invited, encouraged and celebrated by dragon boat races, along with decorative spears, banners, shisa dances and other festivities.