From SamuraiWiki
(Redirected from Tenjin)
Jump to navigationJump to search 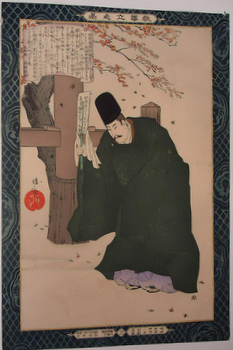 Sugawara no Michizane in a woodblock print by Kobayashi Kiyochika.

Sugawara no Michizane was a Heian period courtier and renowned poet who is famous for his exile to Dazaifu, and for his posthumous deification as Tenjin, kami of calligraphy and scholarship. His legend, in a variety of forms, is a common subject of paintings, theatre (incl. kabuki and puppet theatre), and literature.

According to some versions of his legend, Michizane was not born, but simply appeared to the Sugawara family one day, as a young boy. He demonstrated great talent for poetry and calligraphy, and grew up to become a great statesman. His rivals at court, including Fujiwara no Tokihira, however, conspired against him, resulting in Emperor Daigo exiling Michizane to Dazaifu. This was the court's chief branch office overseeing all of Kyushu, and thus being head of Dazaifu was still a rather high-ranking post, but, due to its remote location, it was considered a serious punishment. It is said that his favorite plum tree uprooted itself and flew to Dazaifu to be with him.

Though Michizane pleaded with both the Court and the kami of his innocence, he eventually died in exile, in 903. Legends say that the ox-cart carrying his body back to Kyoto stopped at Tsukushi (in what is today Hakata) and refused to move further; this was taken as a sign that he wished to be buried there, and so Sugawara no Michizane was buried at Tsukushi.

Following Michizane's death, storms and floods plagued Kyoto. Different versions of the myth feature Michizane appearing above the Imperial Palace as a storm god, either with or without serpents, or other manifestations accompanying him, attacking the palace, or individual courtiers, with lightning and hail.

A later episode of the myth relates that the prominent monk Nichizô died during a journey to Mt. Kinpusen near Yoshino, and was brought back to life by the gods; he was then led by the spirit of Michizane to Michizane's palace in the heavens, and then to the palace of Enma, King of Hell, where he witnessed the late Emperor Daigo being tortured; the Emperor explained to Nichizô how to pacify Michizane's angry spirit, and he was then returned to earth. Meanwhile, a young girl appeared before the Imperial court, claiming that she had been commanded by Michizane's spirit to construct a shrine to him at the Ukon horse grounds. After a number of other oracles and similar messages, the court began construction on just such a shrine. After the Imperial Palace was destroyed in a fire, the court decided that Michizane's spirit had not yet been pacified, and so they granted him the posthumous title of daijô daijin ("Chancellor of the Realm"), and named him Tenjin, a kami of scholarship and calligraphy, and of protection for those wrongfully persecuted.

Today, there are four major Tenjin shrines in Japan, including Kitano Tenmangû in Kyoto, Dazaifu Tenmangû in Dazaifu, Egara Tenjin Shrine in Kamakura, and Umeda Tenmangû in Osaka, along with a great many smaller/lesser shrines, at which students regularly pray for success in their exams, and in school in general. The kabuki play Sugawara Denju Tenarai Kagami ("Sugawara and the Secrets of Calligraphy"), in which Michizane is referred to as Kan Shôjô ("Prime Minister Sugawara"), is counted among the three most popular jidaimono plays in the kabuki repertoire, alongside Kanadehon Chûshingura and Yoshitsune Senbon Zakura.