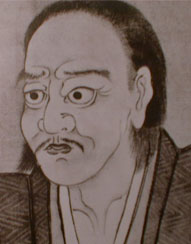 Miyamoto Musashi – Possibly a self portrait.

The famed swordsman Miyamoto Musashi was born Shinmen Takezo in Harima province and may have fought at Sekigahara under the Ukita as a common soldier. He makes no mention of this (perhaps unsurprisingly) in the brief biography in his book, rather confining himself to his achievements in single combat. He claimed to have defeated his first opponent (a certain Arima Kihei) at the age of 13, following this up with a victory over "powerful martial artist called Akiyama of Tajima province." After 1600 Musashi drifted to Kyoto and became involved in a well-known battle with the Yoshioka School of swordsmanship, emerging victorious. He wrote that he engaged in sixty duels without suffering defeat once, and was noted in this regard for his skill at handling two swords at once. He was also remembered for employing a simple bamboo sword, which he used to deadly effect.

Much of Musashi's life between 1600 and 1640 is the stuff of legend and some have postulated that he served at Osaka Castle (1614-1615) on the defending side, taking quite a few heads in the process. Better well documented is Musashi's part in the Shimabara Rebellion of 1638. Serving on the side of the Tokugawa Shogunate as a staff officer of the Ogasawara, Musashi was injured and put out of action by a rock thrown by a peasant. Some of the important events depicted in Yoshikawa Eiji's famous novel Musashi have a basis in reality, including his battle with the Yoshioka School, his defeat of the noted spearman Inei (chief priest of the Hôzô-in), and his duel in 1612 with Sasaki Kojiro, another famed swordsman. Less well-known is his skill as a painter, his works including a number of self-portraits and naturescapes.

Musashi the man must have cut a forbidding appearance: he was said to have rarely bathed or changed his clothes as well as suffering from a somewhat disfiguring skin condition. Following his duel with Sasaki, he seems to have focused his energies on perfecting his style of swordsmanship, spending much time in travel and reflection - thus epitomizing the much-beloved image of the brooding wanderer samurai.

In 1640 Musashi accepted service with the Hosokawa clan, and three years later, in Higo Province, began work on his great book, Gorin no Shô (The Book of Five Rings). He finished this influential work on swordsmanship in May 1645 - the same year he died.

Musashi has enjoyed an immense popularity in the 20th Century and beyond, largely as a result of Yoshikawa's novel (which was originally published in serialized form in the Asahi Shimbun). Musashi skillfully weaves fact and fiction together to create an engrossing tale that has experienced increasing renown in the West. Interestingly, the Asahi Shimbun noted in 1988 that at least one Edo Period source questioned Musashi's duel with Sasaki, stating that Musashi was not alone at the fight, and that his followers killed Ganryu when he had been knocked down to the ground.

Musashi's own book, the Gorin no Shô, was quite well thought of in the United States during the 1980's as a glimpse into the Japanese mind, and was thus consumed by American businessmen - perhaps to the ironic amusement of their Japanese counterparts.