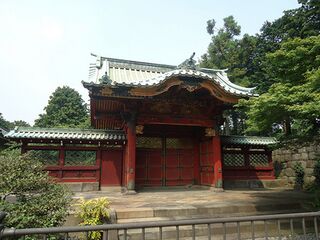 Tokugawa Tsunayoshi was the fifth shogun of the Tokugawa shogunate, ruling from 1680/8/23 until his death from smallpox on 1709/1/10. He was the fourth son of third shogun Tokugawa Iemitsu and shogunal concubine Keishôin. Tsunayoshi is known chiefly for his "Kindness to Animals Decrees" (shôrui awaremi no rei), and is thus often known as the "Dog Shogun" (Inu kubô).

Tsunayoshi succeeded his elder brother Tokugawa Ietsuna to become shogun on 1680/8/23. His rule is described as being quite strict at times, but as also quite arbitrary, and Tsunayoshi is generally regarded as one of the least competent of the shoguns. Even so, the bureaucrats and administrators under him did well, maintaining the day-to-day governance of the nation, and Japan saw several decades of incredible prosperity before the bubble burst and real problems began to sink in. The first of Tsunayoshi's "Laws of Compassion" were issued in 1687; in 1708, he issued a further series of edicts, obligating that all animals were to be kindly treated; that if horses got tired while being ridden, they were to be stabled and taken care of by whatever mansions are nearby; and that post-horses were not to be overtaxed, and were to be well taken care of in both shogunal and domain lands.[2]

Tsunayoshi is also known, however, as a great patron of "Chinese studies" (kangaku), and of Ôbaku Zen, which was introduced to Japan during his reign. Tsunayoshi supported the kangaku scholars Yanagisawa Yoshiyasu and Ogyû Sorai, and invited Chinese Zen monks, and Chinese and Japanese scholars of the Chinese classics to audiences and discussions. As shogun, he is said to have styled himself as both a devout Buddhist, and also taking after the Confucianist ideal of the sage-king. Tsunayoshi commissioned or funded the publication of numerous texts of Confucian and other learnings, including the Six Courses in Morals, in accordance with the belief that educating the masses would contribute to bringing the realm into greater harmony and order. He also delivered some 240 lectures on Confucian topics between 1693 and 1700, permitting anyone to attend.[3]

He also showed a great interest in Japanese imperial traditions, reviving the Daijôsai (harvest festival) ritual which had not been practiced since the 15th century, and sponsoring efforts to identify and restore Imperial tombs. Sixty-six of 78 tombs considered to be imperial tombs acquired their standard identifications as a result of the latter set of efforts, during Tsunayoshi's time.[4]

Tsunayoshi was buried at Kan'ei-ji. His posthumous Buddhist name was Jôken-in. Tsunayoshi's tomb suffered damage during the Meiji Restoration, and was destroyed in the Allied bombing of Tokyo during World War II. The lavish gate leading to the tomb, a handwashing station, and a plaque inscribed by the Emperor, however, survive, and have been designated Important Cultural Properties.[5]