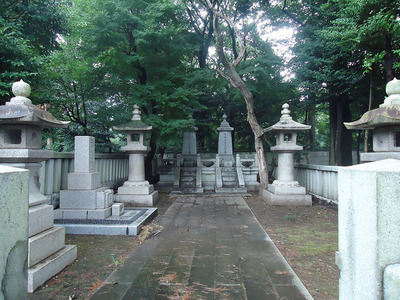 Hirata Tôsuke was a Meiji and Taishô period statesman who served as Minister of Commerce and Agriculture and later Minister of the Interior under Prime Minister Katsura Tarô. He was also a member of the Iwakura Mission, and later of the House of Lords.

The second son of physician and Yonezawa han retainer Itô Shôteki, he was adopted by domain physician Hirata Ryôhaku, and took the name "Hirata." He attended the han school Kôjôkan as well as studying under Koga Kin'ichirô in Edo, and during the Boshin War served as a field physician for the Aizu han faction.

After the Meiji Restoration, Hirata moved to Tokyo to attend the Daigaku Nankô (Southern School of the University), and later joined Ogura Shohei in taking up employment at the Osaka Kaiseijo (a school of foreign studies established prior to the Restoration). In 1871, he traveled to Europe as a member of the Iwakura Mission, earning a doctorate in politics and law from a university in Prussia.

Returning to Japan in 1876, he gained the favor of several prominent figures including Yamagata Aritomo, Shinagawa Yajirô, and Kido Kôin, and entered into government service. He initially served briefly in the Ministry of the Interior before being transferred to the Ministry of Finance. Hirata then married Shinagawa's adoptive daughter Tatsuko, and co-founded a German Association with Shinagawa. He became a member of the House of Lords in 1890 and that same year was named interim secretary of the Ministry of the Interior, and secretary of the Privy Council. Within the House of Lords, he worked to strengthen the power of Yamagata Aritomo's faction. Over the course of the 1890s, he played a role in the drafting of the Meiji Constitution, and of much key legislation of the time. He was then named head of the Cabinet Legislation Bureau in 1898.

In 1901, Prime Minister Katsura Tarô named Hirata to his cabinet, as Minister of Agriculture and Commerce. In that position, he was particularly active in setting regulations for industrial associations, and encouraging their growth and development; these associations would later develop into some of Japan's major agricultural cooperatives. During Katsura's second administration, Hirata was named Minister of the Interior in 1908. He helped develop the Imperial Rescript of 1908, and continued to work to advance agricultural and industrial development in the countryside.

In 1912, Hirata ran for Prime Minister, but dropped out of the race, and later backed Terauchi Masatake. Under Prime Minister Terauchi, he served as a member of the diplomatic survey service, and interim president of the educational council. Following the death of Yamagata Aritomo in 1922, Hirata became Minister of the Interior again, and served as an advisor to genrô Saionji Kinmochi.

Following his death, Hirata was buried alongside his wife at Gokoku-ji in Tokyo.