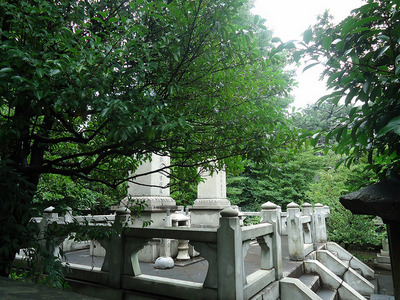 Yamagata Aritomo was a Meiji period statesman, serving as Prime Minister for several terms, and playing a prominent role in a number of significant developments in military policy.

Yamagata studied for a time under Yoshida Shôin.[1]

In the early 1870s, Aritomo served as Vice Minister of Military Affairs, and was among the chief figures advocating for military conscription. By 1873, he convinced the rest of the Meiji government to implement a system of conscription.[2]

He oversaw a thorough reorganization of the Imperial Japanese Army in 1878, after difficulties in Taiwan, Kyushu, and elsewhere.[3]

Yamagata played a key role in the drafting of the 1890 Imperial Rescript on Education alongside Motoda Eifu and Inoue Kowashi. That same year, Aritomo broke an impasse in the National Diet, allowing the government to pass a budget for the first time, albeit only due to Aritomo's resorting to bribery and force.[4]

Yamagata became Prime Minister for the second time in 1898.

In 1900, Yamagata put into place a new policy stating that Ministers of Army and Navy had to be active military officers. This gave the military considerable power, as a Minister could be forced to resign from the military, thus immediately removing him from the Ministerial position, and creating a crisis in the government.

A statue of Yamagata, initiated and funded by Katsura Tarô, and erected in Hagi in 1898 was perhaps the first modern-style bronze statue of a living figure to be erected in Japan.[5]