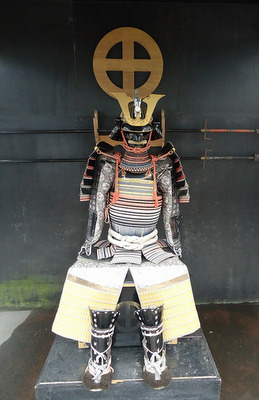 A replica of Shimazu Yoshihiro's armor, on display at Sengan'en

Yoshihiro was the second son of Shimazu Takahisa and 17th head of the Shimazu clan.

Born on 21 August 1535, he displayed great promise from an early age and served in many of his brother Yoshihisa's campaigns. At Kizakihara in 1572, 300 men under Yoshihiro defeated Itô Yoshisuke's three thousand, in what is sometimes called the "Okehazama of Kyushu". He went on to secure Shimazu control over Hyûga province by 1577, and to fight at the battles of Takabaru (1576), Mimigawa (1576), Minamata (1581), and Hetsugigawa (1587). Yoshihiro was named daimyô following the submission of the Shimazu to Hideyoshi in 1587. He led 10,000 men in the First Korean Campaign (1592-93) aboard his flagship Kotaka-maru,[1] and during the Second Korean Campaign fought at the battles of Namwôn and Sachôn. At the start of the First Korean Campaign, a number of retainers, including his own brother Toshihisa, protested being called on to serve and so Yoshihiro was compelled to punish them. He played a role in abducting Korean potters and bringing them to Satsuma as prisoners of war, spurring the development of Satsuma wares (Satsuma-yaki style or technique of pottery).

He sided with Ishida Mitsunari during the Sekigahara Campaign of 1600. Along with Shimazu Toyohisa he joined Ishida's army but their small contingent was almost wiped out in the Battle of Sekigahara. After the defeat he retired in favor of his son Tadatsune, but continued to wield some political power as Tadatsune's guardian. Receiving permission from the shogunate to launch a punitive mission against the Ryûkyû Kingdom, Yoshihiro and Tadatsune did so in 1609.

He is said to have fought in 52 battles over the course of his life and was an able leader. He died on 30 August 1619.