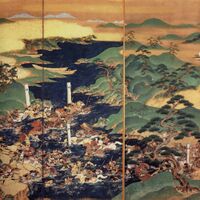 The 1578 battle of Mimigawa took place as Ôtomo Sôrin and his son Ôtomo Yoshimune aimed to recapture lands in Hyûga province taken by the Shimazu clan in the early stages of Shimazu efforts to conquer all of Kyushu.

Determined to crush the growing power of the Shimazu, Ôtomo Sôrin and his son Yoshimune led an enormous host into Hyûga, intent on recapturing lands taken from the Itô family. Due to Sôrin's devotion to Christianity, he was particularly keen to destroy Buddhist temples in the lands he attacked or conquered. This of course earned him, and the Ôtomo clan, the ire of many of the common people.[1]

Tawara Chikataka, Sôrin's brother-in-law, led the bulk of the army to besiege Shimazu Iehisa in Taka castle. Yoshihisa hastily rallied his kinsmen and marched north to Sadowara, where he was briefly held up by bad weather. Meanwhile, his brother Yoshihiro, who was advancing along a different route, encountered and scattered an advance Ôtomo force at Mimigawa, following up this success with the destruction of an enemy fort at Matsuyama. Yoshihisa then advanced to the Taka area, and joined with the rest of the Shimazu clan. In the resulting battle Tawara sent the Ôtomo army in a frontal attack that was repulsed after some bitter fighting. The Ôtomo were quickly routed, and Yoshihisa won an amazing victory that cost his enemy thousands of men and heralded their decline. The severe losses led to declining support among the Ôtomo retainers, and the Ôtomo had to deal with dissension from this time forward. Further, hearing of the defeat, Sôrin himself quit from northern Kyushu.[1]

This battle represents one of several significant occasions in which the Shimazu, though among the major users of arquebuses, faced the Ôtomo clan's European-made cannon.[2]