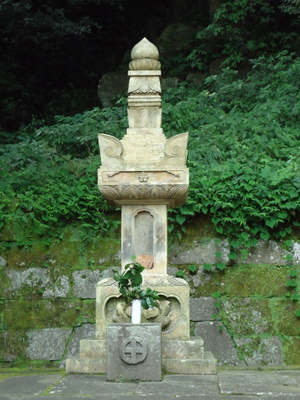 Tadatsune was the 3rd son of Shimazu Yoshihiro. He became the daimyô of the Shimazu following his family's involvement in the Sekigahara Campaign and went to Edo in 1607[1] to personally pledge his loyalty to Tokugawa Ieyasu. He received the character 'Ie' from Tokugawa Ieyasu and surname Matsudaira.

Tadatsune (now known as Iehisa) thus became the first Edo period lord of Satsuma han; he requested, and received, permission to invade the Ryûkyû Kingdom, and did so in 1609.

He led troops at the Osaka Winter Campaign and was on his way to join the Osaka Summer Campaign with 13,000 troops but arrived after the castle had fallen. He won favor with the Tokugawa Bakufu in 1609 by sending an expedition to Okinawa that resulted in the king of that island being brought to Edo and tribute given.

Iehisa rose through the court ranks over the course of his career; in 1599 he held the title of Minor Captain (少将, shôshô) and the Lower Senior Fourth Rank. He was named Royal Advisor and concurrently Middle Captain (参議兼中将) in 1617, and was then raised to the title of Chûnagon and to the Junior Third Rank in 1626.[2] This was the highest court rank any Shimazu lord would achieve in the Edo period.[3]

Iehisa was also confirmed in his fief, with a kokudaka of 605,607 koku in 1617. As such, Ueno Takafumi cites this as marking the Shimazu clan's first performance of sankin kôtai.[1] In 1624-1625, Iehisa journeyed again to Edo, this time leaving his wife Shimazu Kameju in Edo as a political hostage; this is said to have been done on Iehisa's initiative, and marks an early example, or precedent, upon which the shogunate based its later decision to oblige all daimyô to leave their wives and heirs in Edo as hostages.[1]