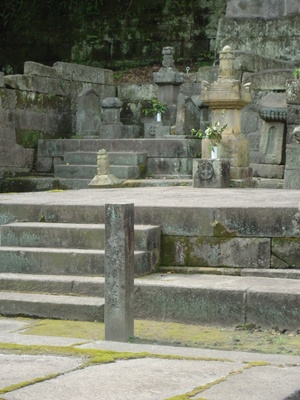 Shimazu Takahisa's grave, at the Shimazu clan cemetery at Fukushô-ji in Kagoshima

Takahisa was the 15th head of the Shimazu clan, and oversaw the relocation of the clan's seat from Shimizu castle to Uchi castle.

He was born on 28 May 1514, the son of Shimazu Sagami no kami Tadayoshi (1492-1568), and was adopted by Shimazu Katsuhisa. He became the lord of Kagoshima after Katsuhisa was forced to flee by Shimazu Sanehisa's rebellion in 1526. A capable and ambitious leader, Takahisa took Kagoshima in 1536 and afterwards gradually extended his authority throughout Satsuma province. In addition to Sanehisa's branch of the Shimazu, Takahisa faced resistance from such erstwhile vassals as the Iriki-in, Kimotsuki and Ketô-in clans. He was one of the first daimyô to employ firearms in battle, doing so at Kajiki in Ôsumi province 1549. He met with Francis Xavier in Kagoshima that same year.

Takahisa relocated the clan seat to Uchi castle in 1550, and dispatched Ijûin Tadaaki to Shimizu to suppress rebellions and secure Shimazu control over the province; however, he faced considerable resistance from the Kimotsuki and Shibuya clans. In 1554, Takahisa's forces won a notable victory against the Hishikari, Kamô, and Ketôin clans at Iwatsurugi castle. He then began fighting the Shibuya, Iriki-in, and Itô clans in earnest; his son Shimazu Yoshihisa would later complete the defeat of these clans, and secure Shimazu control over the remainder of Satsuma province.[1]

He officially retired in favor of Yoshihisa in 1566, having brought some measure of stability to the Shimazu domain. By 1569, he had defeated the Iriki-in and Tôgô clans, and secured his hold on Satsuma; the following year, he repulsed a naval attack by members of the Kimotsuki, Ijiki, and Nejime clans. He died on 15 July 1571.