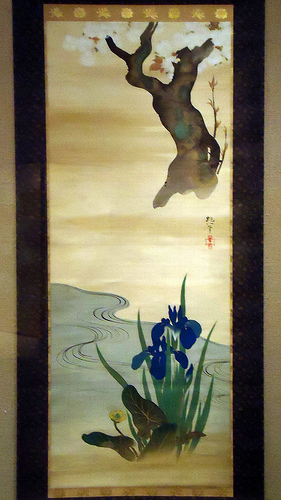 One of a set of three handscroll paintings by Hôitsu depicting the four seasons and the rising sun. 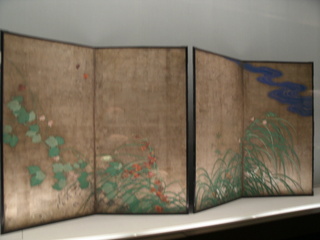 Hôitsu painted "Spring and Autumn Flowering Grasses" on the reverse side of Ogata Kôrin's Raijin & Fûjin (Gods of Thunder & Wind) screens, which his family owned. They are today separated, for conservation purposes. Tokyo National Museum.

Sakai Hôitsu was an Edo-based painter often considered one of the last masters of the Rinpa style.

He was born Sakai Tadanao, the second son of Sakai Tadazumi, the first Sakai clan lord of Himeji han;[1] Tadanao later took on the art-name (gô) Hôitsu, along with numerous other pseudonyms, including poetry names and a monastic name. Outside of a few journeys to Kyoto and Himeji, Hôitsu remained in Edo throughout his life.

He began his artistic career pursuing a variety of talents & interests, including studying Kanô school painting, producing ukiyo-e bijinga in the style of Utagawa Toyoharu), and dabbling in both yamato-e and Western modes of painting, including the styles of the Maruyama-Shijô school and Itô Jakuchû. After removing himself from the lordly succession due to poor health, and taking the tonsure in 1797, Hôitsu took on the monastic name Monsen Kishin, and set himself up a studio in Edo where he dedicated himself to poetry, calligraphy, and painting.[2] It was around this time that Hôitsu switched to producing works more purely in the Rinpa mode. His family had been patrons of Ogata Kôrin (1658-1716) during Kôrin's life, and owned a number of his works, many of which served as models or inspiration for Hôitsu. Having been born in Edo, however, he tried to create an Edo brand of Rinpa (in contrast to the Kyoto Rinpa of Ogata Kôrin and his predecessors, Hon'ami Kôetsu and Tawaraya Sôtatsu), including Edo themes such as Mt. Fuji and morning glories (asagao) in his paintings.

Towards the end of 1809, opened his own artist's studio in Negishi, called Ugean (雨華庵). In 1815, Hôitsu organized an exhibition of Kôrin's works, on the occasion of the 100th anniversary of Kôrin's death, and also had published a book entitled Kôrin hyakuzu ("One Hundred Pictures by Kôrin"). This book, with a preface by Kameda Bôsai, made a notable impact in reviving interest in Rinpa style among artists across the archipelago.[3] Hôitsu was closely connected with intellectual and cultural circles in Edo (including in the Yoshiwara), and an 1820 painting believed to have been created for his 60th birthday, or at a New Year's celebration, includes contributions from a total of sixty-nine artists, poets, and other prominent figures, including Watanabe Kazan, Tani Bunchô, and Hôitsu himself.[4] Further, a number of his own haikai and kyôka poems appear in a compilation by Utamaro. The majority of Hôitsu's most famous works are believed to have been produced around this time, and in the following years, when Hôitsu was in his sixties. At least one of his works, a pair of folding screens depicting waves against a silver-foil background, based on a painting by Kôrin, is today a National Treasure. Hôitsu also produced throughout his life, in addition to Rinpa paintings, haiku and haiga (simple playful paintings in the spirit of haiku).

Among his students, Suzuki Kiitsu is perhaps the most famous today.