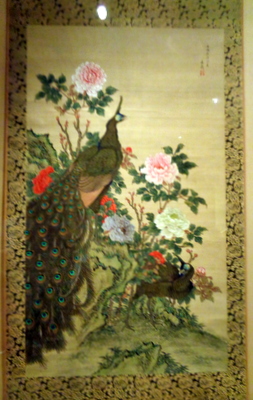 Tani Bunchô was a prominent literati painter of the mid-Edo period.

Born into a samurai family, Bunchô served for a time under Matsudaira Sadanobu, who dispatched him on numerous missions to conduct surveys of antiquities around the realm, as part of studies and preparations for the rebuilding of the Kyoto Imperial Palace. As a result of these surveys, Bunchô learned much about the history and breadth of Japanese arts, as well as being exposed to Chinese and European arts in Nagasaki. During these travels, he also built up considerable personal networks, including amongst Osaka social circles revolving around Kimura Kenkadô. He also built his own circles in Edo, holding regular salons to produce and discuss calligraphy and painting, sometimes meeting in public, in restaurants and the like, where he and his compatriots would produce pieces for onlookers, for a small fee.

Bunchô's works are wide-ranging, but include a reproduction of a pair of paintings by Willem Hendrik van Royen; housed at the Gohyaku Rakan-ji in Edo, these were the only European paintings visible in the city for much of the period. As the paintings were lost in a typhoon in 1820, it is through copies by Bunchô and other artists that these works are known today.[1]