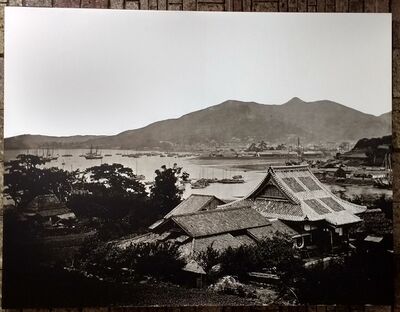 An 1859 photograph of Nagasaki by Abel Gower, with Myôgyô-ji in the foreground, and Dejima and Chinese ships visible in the background

Nagasaki is a port city in Kyushu, the capital of Nagasaki prefecture. It is perhaps most famous today for the atomic bombing of the city on August 9, 1945, but was in the Edo period one of the most major ports in the archipelago for international trade, home to communities of Chinese and Dutch merchants.

The city was established as a trading post c. 1570-1572, and quickly became a major port for Portuguese and Spanish trade. Converted Christian warlord Ômura Sumitada ceded the port town to the Society of Jesus (Jesuits) in 1580, including judicial authority within the town. They quickly established a church and seminario (a Jesuit school for Japanese youths), which included within it a painting academy. The Christian community in Nagasaki enjoyed some considerable early successes, but soon came under persecution; in a particularly (in)famous incident in 1597, 26 Christians in the city, a combination of Europeans and Japanese converts, were executed at the orders of Toyotomi Hideyoshi.

Meanwhile, during his Kyushu Campaign in 1587, Hideyoshi took the city back from the Jesuits, and placed it under centralized control, appointing his own administrators. Nabeshima Naoshige was the first such daikan ("deputy"); when Nabeshima joined Hideyoshi's first invasion of Korea in 1592, the lord of Karatsu took over the task, and was named bugyô ("magistrate").[1]

The Tokugawa shogunate issued its first bans on Christianity in 1606, shutting down Jesuit operations in Nagasaki and expelling them from the country in 1614. Chinese and European ships were restricted to Nagasaki and the nearby port of Hirado in 1616, and then to just Nagasaki in several steps over the course of the 1630s.[2] Kyushu daimyô such as Shimazu Iehisa and Katô Kiyomasa, eager to prove their loyalty to the shogunate, redirected Chinese ships, shipwrecked sailors, and hostages taken in war, from their own domains to Nagasaki at that time.[1] The Spanish were then expelled fully from the country in 1624, and Japanese were forbidden from returning from overseas in 1630. For the remainder of the Edo period, foreign trade at Nagasaki was restricted almost entirely to the Dutch and Chinese;[3] on the rare occasion that Russian or certain other ships attempted to enter the country, they were directed to Nagasaki as well, though they were rarely actually allowed to land people or enter into trade.

In the course of a series of these maritime prohibitions (kaikin) put into in the 1630s, the Spanish and Portuguese were banned from the country, and the Dutch were restricted to the tiny artificial island of Dejima, in Nagasaki harbor. Chinese merchants, originally free to move about the city (and the country), and to intermingle with the Japanese, were restricted after 1689 to the Chinese neighborhood of Nagasaki, known as the Tôjin yashiki ("Chinese mansions"). Pigs were raised in a certain area just outside of the city, serving chiefly these two foreign communities. Nagasaki is sometimes said to have been the only place in Edo period Japan where meat was commonly eaten, with the exceptions in other parts of the archipelago of the consumption of fowl, game animals such as bear, boar, and deer, consumption of meat for medical purposes, and of course the eating of fish.[4]

Along with Osaka, Kyoto, and a handful of other cities, Nagasaki was controlled directly by the shogunate, and was not included within any daimyô domain; defense of the port was the responsibility, however, of the daimyô of all the domains on Kyushu, as part of their corvée obligations to the shogun.[5] This was handled primarily by Fukuoka and Saga han, each of which oversaw the defenses for one year at a time, handing over to one another in the fourth month each year. Fukuoka originally stationed one thousand warriors in the port, removing them when it was Saga's turn each other year; other domains were obliged to contribute to the defenses only on occasions of exceptional need, such as when the Portuguese tried to reopen relations in 1647, and Kyushu and Shikoku domains contributed a total of 50,000 men.[6]

Those sent to Nagasaki in typical years included not only warriors, but also roughly 95 to 165 villagers - chiefly fishermen and other boatmen - impressed into service by way of corvée obligations, to transport warriors in their boats, and/or to serve otherwise in Nagasaki. While middle- and high-ranking Fukuoka retainers served in Nagasaki for around 100 days at a time, lower-ranking figures such as ashigaru typically served for the entire year. Incidents such as the arrival of Russian and British ships in the early years of the 1800s spurred dramatic expansion of defensive precautions, and thus expansion of the number of men dispatched from Fukuoka and Saga to aid in the defense. On two occasions in 1800, more than 10% of the adult male population of Fukuoka domain is said to have been on guard duty in Nagasaki, and in 1808, when the HMS Phaeton sailed into Nagasaki harbor, Fukuoka sent 8,000 men to aid in the defense; they arrived, however, too late, after the Phaeton had already departed.[7]

A samurai official known as the Nagasaki bugyô (Nagasaki Magistrate) was the chief shogunal authority in the city, overseeing both matters within the city, and matters of trade at the port. A daikan, appointed from amongst the Nagasaki townsmen, also helped oversee local matters. The first such daikan was the Christian Murayama Tôan, who was appointed by Hideyoshi, and continued in the position until 1619, when he was executed for his religion. Townsmen continued to serve as daikan until 1676, when town elders (machi toshiyori) took over the position.[1]

For several decades in the 17th century, the bugyô was further assisted by the Nagasaki tandai shoku, who was responsible for the defense of the port. Following that, a clearinghouse or customs office known as the Nagasaki kaisho was established in 1698 and quickly became the chief institution regulating trade at the port, remaining so up until the fall of the shogunate in 1867. Despite numerous dramatic shifts in shogunate policies and in the markets for various goods, the overall total monetary value of the trade done annually at Nagasaki remained steady for nearly this entire period, from 1711 to 1840.[8]

Thirty-six domains, including Tsushima and Satsuma, maintained domain offices in the city.[9] Agents of Tsushima were stationed in the port city in part in order to purchase from Chinese and Dutch merchants certain Southeast Asian luxury commodities such as buffalo horn, alum, and sappanwood, which Tsushima could then give to the Korean Court as tribute goods; by authorization of the shogunate, these Tsushima officials were permitted to buy the highest quality such goods available at a highly reduced rate.[10] Korean castaways found/rescued anywhere in Japan were sent to the Tsushima han office in Nagasaki, after which they could be repatriated to the Wakan ("Japan House") in Pusan. All other foreign castaways similarly passed through Nagasaki, with the exception of those from Ryûkyû, who were sent to Kagoshima to be repatriated. Kagoshima also handled Japanese castaways who had been found/rescued in the Ryukyus.

In the 1850s, Nabeshima Narimasa, lord of Saga han, had artillery batteries constructed on the islands of Kaminoshima and Iôjima in Nagasaki bay. The construction was completed in the 6th month, 1854.[11]

After the port was opened to Western merchant activity in the Bakumatsu period, for a brief time Western merchants attempted to insert themselves into the existing trade networks in marine products, etc. and in Chinese goods. However, around the same time, the Taiping Rebellion caused the number of Chinese ships calling at the port to plummet, and the traditional patterns of trade between the Chinese residents in Nagasaki and the Nagasaki kaisho collapsed. The character of activity at the port transformed rapidly, as direct trade with Westerners came to dominate; Chinese merchants in the port city turned to insert themselves into this new pattern, abandoning the old one. The port also quickly became the site of a lively trade in modern steamships and sailing vessels, with as many as 106 ships being sold at Nagasaki between 1860 and 1867. Satsuma, among others, began collecting goods from various domains to sell at Nagasaki, as the port was thrown open to freer involvement of outside parties.[12]

The old Jesuit city was comprised of six wards, or machi, which formed the core of the city and which were later re-divided into twenty-three machi. Each of these was self-governing under the authority of machi toshiyori (town elders), and was exempt from land taxes. The outer city, meanwhile, consisted of three villages which were absorbed by the growing city as 43 new machi; taxes paid by the residents of these areas helped pay the salaries of the daikan and machi toshiyori throughout the city. Despite the huge volume of trade passing through the city, the tax base was fairly small, amounting to just under 3,500 koku at the end of the 17th century.[13]

The city grew out of being a small fishing village in the early 16th century to a population of roughly 25,000 by 1609. The city continued to grow over the course of the 17th century, peaking at around 64,500 in 1696, but then declined over the remainder of the Edo period, fluctuating along with the volume of trade. By 1715, the population had already fallen to 42,500. Within this, the Chinese population was generally around 2,000, reaching a peak of 5,000 at times.[14] By the late Tokugawa period, the Chinese community may have comprised as much as one-fifth the total population of the city.[15]