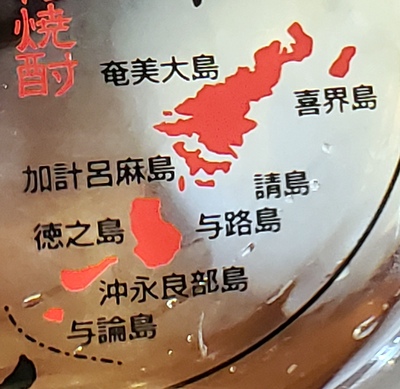 The Ryûkyû Kingdom did not, however, possess any true control over the Amami Islands at that time, and as late as the 16th century was engaged in military efforts to conquer these islands; as Ryûkyû moved north, and the Shimazu clan samurai of Satsuma moved south, both seeking to extend their control into the Amamis, Ryûkyû and Satsuma clashed on a number of occasions. One such clash took place in 1493; the Omoro sôshi describes the kingdom as attacking the islands during the reign of King Shô Shin (r. 1477-1526) and one particularly notable instance of rebellion against the kingdom's authority being led by Yuwan Ufunushi in 1537.[3] Amami Ôshima formally submitted to Ryûkyû's authority in 1571. That same year, the Shimazu attacked the island as part of efforts to seize control over all of Ryûkyû.

Satsuma succeeded in conquering the Amamis and Okinawa in 1609. Following its defeat, the Ryûkyû Kingdom was permitted to remain intact and quasi-independent. Okinawa and all the islands to the south remained under the control of the kingdom, which paid taxes to Satsuma and was in certain other respects subordinated to Satsuma's control. Satsuma meanwhile implemented its own direct administration over the Amamis, but continued to regard the islands as part of the kingdom's territory.[4] Satsuma undertook land surveys in 1621, assessing the agricultural productivity of the land in order to calculate taxation rates. The Amamis were initially assessed at just over 51,756 koku, a figure raised to 57,583 in the late 1650s or early 1660s.[5] However, in reports to the shogunate, Satsuma included the kokudaka of the Amamis in that of the Ryûkyû Kingdom, claiming a total kokudaka for the kingdom of 123,700 koku, even though this included a mix of territories controlled by the kingdom, and by Satsuma.[4] The main agricultural products on the islands traditionally included rice, Satsumaimo (sweet potato), sugar cane, papaya, banana, and pineapple. Sotetsu (cycad) also grows naturally on the island. The Amamis are also known for their textiles, including especially Amami tsumugi (pongee). This tsumugi, along with sugar, were the chief goods claimed by Satsuma in taxes.

Over the course of the period, Satsuma emphasized the production of sugar on the islands, enacting various policies aimed at increasing the amount of sugar, a very lucrative product, it could extract from Amami. Islanders were required from 1745 onwards to pay their taxes in sugar instead of rice, a policy which effectively forced many, if not most, islanders to switch at least some of their time, effort, and land from growing rice and other food to subsist on, to growing and refining sugar cane. This resulted in severe difficulties for many families, who struggled at times to have enough to eat; in 1755, 3,000 people died of famine on Tokunoshima. Later, beginning in 1787, Satsuma put into place a system in which islanders could trade sugar for rice and other goods they needed. Though production was done entirely by islanders, who were not deprived of their land nor entered into slavery or indentured servitude, the extent of Satsuma's focus in these islands on maximizing outputs of a single product has led some historians to describe the system as "a structure of colonial extraction," drawing comparisons to British and American sugar plantation operations in the Caribbean and Hawaii respectively.[6]

A samurai official known as a daikan served as the chief Satsuma official on Amami Ôshima, beginning in 1613. At first, he was charged only with overseeing Ôshima and Kikaigashima. In 1616, his authority was extended to Tokunoshima, and in 1690 to encompass Okinoerabu and Yoronjima as well. In 1693, an additional daikansho (daikan office) was established on Kikaigashima. Satsuma also dispatched yokome, tsukeyaku, and other officials to serve under the daikan. Local elites or official structures, were permitted to remain intact to some extent, however, with Amami Islanders serving as yohito, okite, yokome, and the like, organized according to magiri (traditional administrative districts), under the authority of the daikan. All of these Satsuma officials initially served terms of two to three years; this was later extended to four year terms.[7] These local Amami officials were banned from interacting with officials of the Ryûkyû Kingdom, beginning in 1623. However, Ryûkyû or local Amami elites were seen as still possessing some residual rights or sovereignty throughout the period, and as late as the 1870s, there were steps taken to have the Ryukyuan royal family officially relinquish all claims to the islands.

Following World War II, the Amami Islands were restored to Japanese sovereignty (ending the US Occupation in the islands) on December 25, 1953.[8]