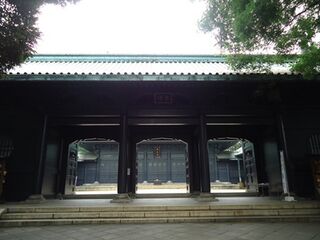 The Yushima Seidô is a Confucian shrine located in Tokyo, which formerly housed the Shôheizaka gakumonjo academy of the Hayashi clan.

The shrine, and the academy, trace their history to an academy founded by Hayashi Razan in 1630, on land given him by the shogunate at Shinobu-ga-oka, in Ueno. The academy consisted originally, essentially, of a study and a library. Two years later, with the help of Tokugawa Yoshinao, lord of Owari han, Razan built a Confucian temple on the site, calling it the Senseiden (先聖殿). Razan's successor, Hayashi Gahô, in 1663, added a dormitory and began training disciples in earnest, calling the school Kôbun-kan or Kôbun-in. Shogun Tokugawa Tsunayoshi renamed the main shrine hall the Taiseiden (大成殿), and the shrine complex "Seidô" 聖堂, as he removed the shrine and the academy to Ochanomizu in 1691, housing the academy within the Taiseiden. Some of the buildings were repainted vermillion, with blue and green highlights, at that time, and Gahô's successor as head of the Hayashi clan, Hayashi Hôkô, was formally named its head, or daigaku no kami (大学頭).

After Hôkô's death, the Hayashi clan fell into decline, as did the school, which came to be dominated by other schools of thought (other than the Hayashi school of Neo-Confucianism). In 1703, and again in 1772, the school suffered extensive damage from fires.

Matsudaira Sadanobu was appointed head of the rôjû in 1787. He brought the school under the direct control of the shogunate, rebuilt and expanded the school buildings, and made it a site for the training of shogunate and domain officials. It was at this time that the school was officially named "Shôheizaka gakumonjo" after Confucius' birthplace of Chāngpíng village (J: Shôhei). As part of the Kansei Reforms which Sadanobu initiated, all teachings but those deemed "correct" or "appropriate" by the shogunate were banned, and the faculty was bolstered by the addition of Shiba no Ritsuzan, Okada Kansen, Bitô Jishû, Koga Seiri and others.

Matsudaira Taira, the son of Matsudaira Norimori, lord of Iwamura han, became the head of the Hayashi clan in 1793, taking on the name Hayashi Jussai. He became head of the academy as well, and took over its administration, opening up enrollment or attendance to the children of hatamoto, daimyo's retainers (baishin), country samurai (gôshi), and ronin, where previously it had been limited only to higher-level shogunate or domain officials (or those being cultivated for such positions). By the Bakumatsu period, the student body consisted of some of the brightest from a variety of domains, and from other samurai backgrounds.

Other teachers at the school included Satô Issai and Asaka Gonsai, and in 1862, with the establishment of the gakumonjo bugyôsho, Shio no Yatôin, Asai Sokuken and others also joined the faculty.

After the Meiji Restoration, for a brief period, the academy was renamed the Shôheigakkô, and then the Shôhei-daigakkô, before being made the site of a modern-style normal school (i.e. teacher's college), under the name Shihan gakkô (in 1871; renamed Tokyo Shihan gakkô the following year). The Tokyo Women's Normal School (Tokyo joshi shihan gakkô) was then established on a neighboring plot of land. The Shihan gakkô was later renamed Tokyo Educational College (Tokyo kyôiku daigaku) and was then relocated to Ibaraki prefecture, becoming Tsukuba University; the women's college eventually became Ochanomizu Women's University.

Meanwhile, beginning in 1871, the statues of Confucius and others were taken down, and the following year, the Ministry of Education made use of the site for Japan's first domestic exposition, in which artworks and other products were displayed in a Western exhibitionary manner, as preparation for the 1873 Vienna World's Fair. The show was a juried exhibition, in which submissions were accepted from all over Japan; items on display in the end included Imperial treasures and works of taxidermy, as well as paintings, shachi, musical instruments, textiles, metalworks, ceramics, and lacquerwares. The Yushima Seidô continued to be used as an exhibition space for some time after this, and exhibits held there are sometimes described as marking the beginnings of the Tokyo National Museum.[1]

The site, and the statues, were later restored, however, and the shrine was named a national historical landmark in 1922, before being destroyed in the Great Kantô Earthquake the following year. It was rebuilt in 1935, in steel-reinforced-concrete, instead of in wood, and painted in black, inside and out. The roof was done in the irimoya style, with bronze ornaments. The world's largest statue of Confucius, a 1975 gift from the Taipei Lions Club, stands on the grounds.

Heads of the Academy