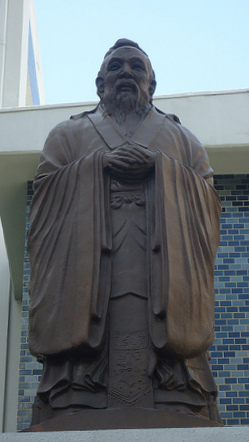 Statue of Confucius on the former site of the Confucian temple in Kumemura, Naha, Okinawa

Kǒng Qiū, or Kǒng Zǐ (lit. "Master Kǒng"), commonly known in English as Confucius,[1] was a philosopher of ancient China. His teachings, collected into the Analects of Confucius, along with the various forms of Confucianism and Neo-Confucianism they have inspired, have historically formed the core of political philosophy and moral education throughout East Asia.

Originally from Chāngpíng village in Qufu in the state of Lu in what is today Shandong province,[2] Confucius likely came from a well-to-do family, since he is known to have been educated in writing, music, and rites. His father died when Confucius was quite young. He is said to have pursued a career as a statesman, ultimately resigning when he found the task conflicted with his personal beliefs. He then traveled widely, accumulating followers and disciples, who after his death assembled his teachings into the Analects.

His teachings are wide-ranging, but can generally be said to be of a humanistic, or human-focused, nature. Confucius does not speak much about death, the spirit world, or the cosmos, but focuses on philosophies of upright behavior in everyday life and in actual society, through the theoretical example of the jūnzi (君子, J: kunshi), the proper gentleman. Among his teachings, he emphasized correct behavior in accordance to one's relationships, writing that fathers & sons, rulers & subjects, husbands & wives, brothers, and friends should each treat one another accordingly.[3]

He also emphasized the use of moral force, or virtue (徳, C: dé, J: toku), and the power of setting an example, as a means for achieving order, over the use of violence or various methods of coercion. Three of the chief elements of moral uprightness, according to Confucius, were filial devotion, i.e. obedience to one's parents and ancestors (孝, C: xiào, J: kô or kyô), humanity or humaneness (仁, C: rén, J: jin or nin), and decorum or etiquette (礼, C: lǐ, J: rei).

Confucianism was violently suppressed under the First Emperor of Qin (c. 210s BCE), but was revived and made the official state philosophy of the Han Dynasty in 139 BCE. In the centuries which followed, a number of Confucian temples were built. Emperor Taizong of Tang (r. 626-649) later ordered that temples to Confucius be constructed in every major city in the empire.

The Confucian Temple and Cemetery, and Kong Family House, in Qufu are today registered UNESCO World Heritage Sites. Though today managed by the local government (i.e. as public institutions), they were until at least the 1920s still held and managed as the private property of the Kong family - Confucius' lineal descendants - and the mansion in particular was open only to visitors with a formal introduction or invitation.[4]