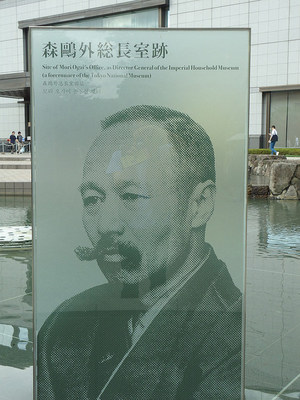 Mori Ôgai was a novelist and literary critic of the Meiji and Taishô eras, and is also known as a military medic. He is today considered a representative example of Meiji era intellectuals.

In December 1917, he was appointed head of the Imperial House Museum, and continued in that position until his death in 1922. It was a position which covered museums in Tokyo, Kyoto, and Nara. For many years, every autumn, he would come to Nara and help oversee the opening of the Shôsôin; during that time, he would stay in a house at the northeast corner of the Nara National Museum grounds. As part of his job, he would actively visit the various historical sites and ancient temples & shrines in Nara.