The Tôkaidô (lit. "Eastern Sea Road") was one of the main arteries of the realm, connecting Kyoto in the west and the eastern provinces (in the early modern period, the shogunal capital of Edo); the road came to particular prominence in the Edo period, as the busiest, most famous, and most important highway in Japan. Famed in both art and literature, the Tôkaidô carried massive daimyô entourages traveling to and from the shogunal capital on sankin kôtai journeys; thousands of individual travelers and pilgrims;[1] shogunal, imperial, and other officials on official business; merchants shipping all sorts of goods; and foreign embassies; as well as messengers and the like.

The road runs roughly 300 miles[2] from Tokyo to Kyoto, mostly near the Pacific coast. Today, the National Route #1 expressway and Tôkaidô Main Line train line run along the old route.

The Tôkaidô was originally established in the late 7th or 8th century as one of several highways officially built by the Nara Imperial Court. At that time, the eastern provinces were the rural frontiers of the realm, but once Kamakura became the shogunal capital in the 1190s, the Tôkaidô gained in importance, as it now connected the shogunal and imperial capitals.

The road declined once again in the Muromachi period, when the shogunate was based in Kyoto. However, it served an important role in the movement of troops in certain portions of the military maneuvers of the Sengoku period. 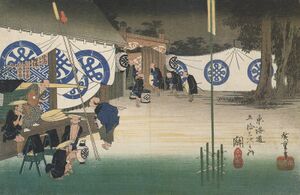 In the Edo period, the Tôkaidô was more formally organized, with fifty-three official post-stations (shukuba), and a series of checkpoints (sekisho). The fifty-three stations were formally established in 1601/1, and the Tokugawa renovation, or re-establishment, of the highway as a whole is generally said to have been completed by 1624.[3]

Inns, warehouses, hikyaku messenger services, post-horses, brothels, and the like quickly developed along the road. At the peak, there were some 111 honjin and 73 waki-honjin (special lodgings for elite visitors such as daimyô, shogunal officials, and foreign embassies) along the road, as well as hundreds if not a few thousand hatagoya (inns).[4] While some post-stations had as many as four or six honjin, the overall average number of honjin per post-station was 2.1; post-stations had roughly 1.3 waki-honjin on average.[5] Though previously conceived of as beginning in Kyoto and ending somewhere in the Musashino area, the Edo period Tôkaidô was thought of as running in the opposite direction; it officially began at Nihonbashi, in Edo, and ended at Sanjô Ôhashi (Sanjô Bridge) in Kyoto, with an extension running to Osaka.

One of the most famous sekisho was established at Hakone in 1619, controlling the western entrance into the Kantô.

About 146 sankin kôtai groups traveled the Tôkaidô each year,[6] in addition to shogunal officials, imperial envoys, merchants, messengers, pilgrims, and the occasional foreign embassy. The vast majority of travelers walked the Tôkaidô. For an individual, the journey typically took about thirteen days on average.[7] Large groups, such as a daimyô's sankin kôtai entourage, moved more slowly, about ten ri a day.[8]

Though considered a single highway, there were a number of rivers which were not bridged by the Tôkaidô. Rather, travelers were left to take ferries across. Regulations were put into place, however, requiring that travelers cross at these designated crossings, and not at other locations up- or down-river. In total, the Tôkaidô journey included eight river crossings by ferry, and four rivers where travelers had to ford the river on their own. Bridges were built and maintained at several other river crossings along the route, where the bridges were less likely to be lost in flash floods.[2] The crossing at Shichiri-no-watari, connecting Miya-juku and Kuwana across the tip of Ise Bay, was widely considered the most dangerous of these water crossings. The so-called Saya Kaidô was a short detour from the Tôkaidô, combining overland sections and ferry boats, which provided a safer alternative; both Shogun Tokugawa Iemochi and the Meiji Emperor are known to have taken advantage of this detour. Following a disaster in the Shichiri-no-watashi crossing in 1671, Ryukyuan embassies to Edo similarly took portions of the Nakasendô and Mino Road as a detour, in order to avoid Shichiri-no-watari.

The 53 stations of the Tôkaidô were located an average of 8.4 km apart from one another; a survey conducted in 1843 indicates that at that time each station had an average of 55 commoner inns (hatagoya) and an average population of 3,950.[2] The road originally ended at the Sanjô Bridge over the Kamo River in Kyoto, but four additional stations were later added. This extension, known alternatively as the Ôsaka Kaidô, Kyôkaidô, or simply considered an extension of the Tôkaidô, ended at Kôraibashi in Osaka.

Some records indicate that many sections of the road were quite well-maintained. Ditches running along the sides of the roads were maintained to help drain off water, sand was spread over the roads when they were wet, and in hot, dusty weather, water sprayed to settle the dust. In certain sections in the mountains, stones were carefully placed to help increase traction and prevent mudslides, while also providing for effective drainage. In other sections, rows of trees (often cryptomeria, aka sugi) were planted, providing shade for travelers and helping to prevent erosion. Distance markers were placed one ri apart along the road, and other markers or signs indicated major junctions. The roads were also commonly swept and cleaned when an important party, such as a daimyô's sankin kôtai procession, or a foreign embassy, was expected to be passing along that section of road.[2]

Though it is commonly cited that wheeled carts were banned from the roads of Tokugawa Japan, there is no documentary evidence for such a statute. That said, it is known that carts only appeared on certain sections of road and in certain cities. If there was such a ban, it would have served to protect the roads from the ruts and other damage created by wheels, to prevent blockage of the road resulting from spills and the like, and to protect the livelihoods of packhorse operators, who may have petitioned or otherwise voiced their desire for such a ban.[2]

Ukiyo-e artists Hokusai and Hiroshige produced extensive and highly popular series of woodblock prints in the 1830s, depicting landscape scenes along the Tôkaidô. This contributed notably to an already vibrant popularity of travel and travel culture, and of "famous places" (meisho), and thus a sense of "Japanese" "national" identity. These series, along with Hokusai's "36 Views of Mt. Fuji," are today among the most famous and popular pieces in all of Japanese art. Travel along the road was also the theme of numerous poems and books, including perhaps most famously Jippensha Ikku's Tôkaidô dôchû hizakurige ("The Shank's Mare"). 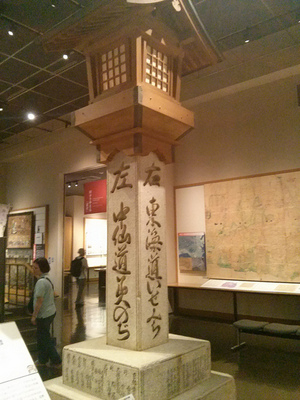 Replica, at the National Museum of Japanese History, of a lantern erected at Kusatsu in 1816. The inscription reads, roughly, "To the left, the Nakasendô and Mino Road; to the right, the Tôkaidô and the road to Ise"

The Tôkaidô Main Line, linking Kobe and Tokyo by rail (via Osaka and Kyoto), opened in 1889.

By the 1910s, rickshaws (a Bakumatsu/Meiji period innovation) were a common sight along the Tôkaidô. One notable traveler, Frederick Starr, rode in a rickshaw, and at times aboard a train, along the Tôkaidô route, but makes no mention of automobiles traveling the road at that time. About a decade later, however, in 1923, the Ford Motor Company arranged for a Ford car (probably a Model T) and truck to be driven the length of the country, from Kyushu to Hokkaido, including for some distance along the Tôkaidô.[9]

Prof. Patrick Carey, who walked the Tôkaidô from Tokyo to Kyoto himself, writes that some 80% of it is still intact, in some form, albeit paved over. In many places, the modern roads follow the route of the old Tôkaidô, and in some remain largely the same width. Though in many areas the vast majority of homes and storefronts are more modern, in some traditional architecture survives, and in some places it even abounds.[10]