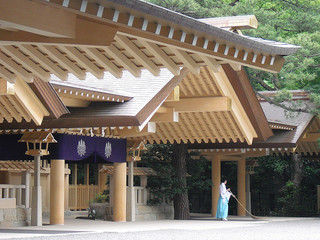 A priest sweeping up at Atsuta Shrine.

Atsuta Shrine is an Imperial Shinto shrine in Nagoya, famous as the site where Kusanagi no tsurugi, one of the Imperial Regalia, is kept. Atsuta is dedicated to numerous kami, including Amaterasu, Susano-o, and Yamato Takeru.

The legendary sword has been kept at the shrine at least since the 7th century, having been supposedly stolen by a Korean monk in 668 and returned to the shrine in 686. It is said to have been lost in 1185 at the Battle of Dan-no-Ura, and either retrieved, or replaced with a replica. Only a very select few, including the Emperor, are permitted to enter the innermost chambers or to gaze upon the sword, so its form, whether it is the original, or whether it even still exists, is unknown.

Much like at Ise Shrine, the public is only permitted access to outer sections of the shrine, while the innermost areas are open only to members of the Imperial family, or the shrine's high priest. The rooftops of the successive gates or secondary shrine buildings leading to the innermost sanctum of Atsuta, where the Imperial Sword is supposedly held, all display key elements of the shinmei-zukuri architectural style. These include chigi which stick up diagonally out from the roofs, and a series of log-like katsuogi running perpendicular to the length of the roof. Both of these originally played crucial structural roles, but have since become purely ornamental. Many of these elements were introduced when the shrine was redesigned in the Meiji period.

The shrine grounds include the oldest stone bridge in the city, and one of the largest stone lanterns in Japan. Eight and a quarter meters tall, it was donated to the shrine by Sakuma Moritsugu, lord of Gokisho castle in Owari province, when his son Sakuma Katsuyuki met with a typhoon at sea, as a gesture of appreciation to the gods. A large kusunoki (camphor) tree on the grounds is said to be over 1000 years old, and to have been planted by Kôbô Daishi.

A wall erected in 1560 by Oda Nobunaga is considered one of the Three (Great) Earthenwork Walls of Japan, along with one at Sanjûsangendô, and one at Nishinomiya Shrine. Nobunaga came to the shrine to pray at that time, following his victory in the battle of Okehazama, and erected a wall of earth & lime, layered with ceramic tiles and hardened with oil, as an offering to the gods.