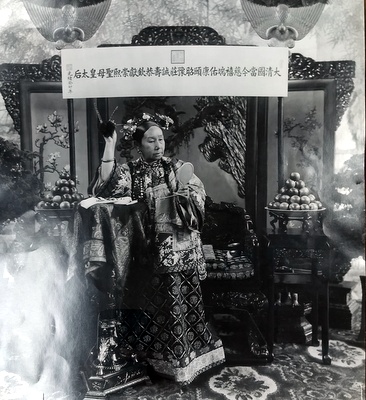 Empress Dowager Cixi was a concubine to the Xianfeng Emperor, mother to the Tongzhi Emperor, and aunt of the Guangxu Emperor, in the late Qing dynasty. She acted as regent from 1861 to 1908, playing an extremely prominent and influential role in the politics of the time, including in guiding the Qing Empire's response to Western encroachment and resisting wide-ranging reforms which according to her critics might have provided the Qing a stronger ability to compete in the modern world and may have even allowed the regime to avoid inviting the sort of revolution which ultimately brought down the Qing in 1911. Though her admirers often describe Cixi as a highly competent leader and a reformer, her critics often paint her as a scheming and extravagant "crone"[1] who was too conservative in her reforms.

In contrast to Cixi's positions, the Guangxu Emperor sought to enact a number of wide-ranging reforms which might have Westernized and strengthened the Qing military, and otherwise prepared the Qing Empire for a stronger response to the Western world, and to a rising Japan. Following the Qing defeat in the 1894-1895 Sino-Japanese War, in 1898, Cixi had the emperor confined in seclusion, and many reformists executed (while others, such as Kang Youwei, escaped into self-exile).