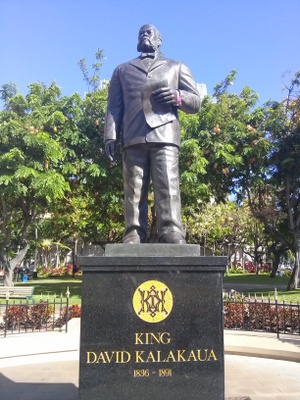 Statue of King Kalākaua in Waikiki

David Laʻamea Kamanakapuʻu Mahinulani Nalōiaʻehuokalani Lumialani Kalākaua[1] was the second-to-last reigning monarch of the Kingdom of Hawaiʻi. He engaged in a world tour in 1881, visiting numerous countries and meeting with their leaders in order to enhance the prestige of the Hawaiian monarchy, familiarize himself with the royal practices of other nations, and to secure labor immigration agreements. In the process, he became the first head of state of any nation to circumnavigate the globe,[2] and the first foreign monarch to visit Japan freely;[3] Kalākaua's meeting with the Meiji Emperor in March of that year set the stage for Japanese immigration to Hawaii.

The king and his party arrived in Japan aboard the British ship Oceanic, sailing from San Francisco and arriving in Yokohama around 8 AM on March 4, 1881. They would then spend one day in Yokohama, twelve in Tokyo, and the remaining six sightseeing in Kobe, Kyoto, Osaka, traveling across the Inland Sea, and in Nagasaki. After a stay of nineteen days, the king departed Nagasaki for Shanghai on March 22, around 5 PM, aboard the Tokio Maru. Kalākaua kept a diary, and Attorney General William N. Armstrong published a book in 1904 based on his notes; however, unfortunately, the details of the king's private meeting with the Meiji Emperor went unrecorded.

Kalakaua took the throne in 1874, and is known for his active engagement on the international stage and his patronage of Hawaiian arts & culture. He visited the United States for the first time that same year.

Like the Meiji Emperor, he adopted numerous aspects of the trappings of European royalty, in order to advance ideas of the legitimacy of the Hawaiian Kingdom and seek respect from the Western powers. He had 'Iolani Palace built in a Western style, and furnished with Western-style furniture, much of it commissioned from master craftsmen in Germany and carved in Hawaii's native koa wood. Kalakaua also had 'Iolani wired for electricity & installed with electric lights before even Buckingham Palace or the White House enjoyed such amenities; it was also the first building in Honolulu to have telephones.[4] The king himself wore Western-style military uniform, as the Meiji Emperor did, and adopted modes of court ritual and etiquette that combined Western and traditional Hawaiian attitudes and practices.[5]

Kalakaua also had a still-famous statue of King Kamehameha I erected across the street from the palace, and was an active patron of hula and other traditional arts, including music, surfing, and Hawaiian martial arts. The annual Merrie Monarch Festival, the top hula competition, is named in his honor.

Politically, Kalakaua struggled against the Missionary Party, a political party founded in Hawaii by American plantation owners, land speculators and the like who pushed for greater advantages for businessmen like themselves, greater US involvement in the islands, stronger adherence to Protestantism, and a figurehead role for the Hawaiian monarchy. Opposing these pressures, Kalakaua pushed for a more strongly independent Hawaiian Kingdom, under a strong monarchy, and traveled the world to meet with world leaders, displaying his cultural and political savvy and seeking to negotiate favorable diplomatic relationships between his kingdom and other nations. These included meeting with Ulysses S. Grant in Washington DC, and the Meiji Emperor in Tokyo (as detailed below). During his visit to Washington, Kalakaua became the first foreign head of state to address a joint session of Congress.[6] Pushing against Western imperialism, Kalakaua initiated or engaged favorably with proposals for both a pan-Pacific confederation under Hawaiian leadership, or an alliance of Asian and Pacific polities under Japanese leadership.

The king's trip to Japan came as part of a world tour. He departed Honolulu on January 20, 1881, sailing first to San Francisco, and then making his way west, stopping in Japan, China, Siam, India, Egypt, various countries in Europe, England, and the United States, before returning to Honolulu on October 29 that same year. His traveling party was quite small, including former schoolmates Chamberlain Colonel Charles H. Judd and Attorney General William N. Armstrong, and a personal valet, the German Baron Robert von Oehlhoffen.[7] Judd, Armstrong and the king had been classmates at the Chiefs' Children's School. For the duration of the trip, Kalākaua named Armstrong "Minister of State" and "Royal Commissioner of Immigration," in order that he might be of equivalent rank to government officials they would be meeting with. His stay in Japan was not necessarily conceived as a formal state visit, however; to the contrary, the king hoped to travel incognito, and arranged with a member of the Oceanic crew for a suite of hotel rooms in Yokohama. Despite no advance notice of the king's plans, the Japanese government arranged a formal reception, with the emperor appointing Hachisuka Mochiaki, Date Muneki, Ishibashi Masakata, and Nagasaki Seigo to a reception committee headed by Prince Higashifushimi Yoshiaki. The Prince would attend to the king extensively throughout his nearly two-week stay in Tokyo.

As the Oceanic approached entered Yokohama harbor, its captain, with the king's permission, hoisted the Hawaiian flag. He was welcomed with a twenty-one gun salute. Hachisuka and Ichibashi then boarded the king's ship along with the vice governor of Kanagawa prefecture and an admiral of the Imperial Japanese Navy, presenting a formal invitation for Kalākaua to be a guest of the emperor for the duration of his stay in Japan. As he alighted from the ship, the emperor's military band began playing the Hawaiian national anthem, Hawaiʻi Ponoʻī, the lyrics of which Kalākaua had written himself, and which had been adopted as the national anthem only five years earlier. All of this is said to have come at a complete surprise to the king, who had expected to maintain a relatively low profile. They were then taken to the Admiralty Office Landing, where they were met by Secretary Durham White Stevens of the American Legation, and Hawaiian Consul General Robert Walker Irwin. Finally, at around 11:30 AM, they met with Prince Higashifushimi, and made arrangements for an audience with the emperor the following day.

Around 11:30 the following morning, the king and his entourage departed Yokohama on an Imperial train, arriving at Shinbashi Station an hour later, where they were welcomed by Prince Higashifushimi, who led them to a meeting with several Imperial princes and many of the top government ministers. The king then traveled by carriage to the Akasaka Temporary Palace,[8] where he was received by the Meiji Emperor in the chief Audience Hall, and then walked with the emperor to another room, where the empress held court. Donald Keene points out that the emperor walking alongside Kalākaua, rather than requiring the king to walk at some distance behind, was particularly significant. Inoue Sueko, daughter of Foreign Minister Inoue Kaoru, served as interpreter for the empress. Following some formal exchanges between Kalākaua and the empress, and then between he and the emperor, the king and his people were led to the Enryôkan, a former daimyô's residence where he was to stay. After settling in, the king was visited by the emperor and Prince Fushimi Sadanaru around 3:30 in the afternoon; this was done as part of efforts to adhere to European diplomatic practices & etiquette.

In the following days, the king enjoyed tours of the government printing office, arsenal, paper factory, and school of civil engineering. In the course of discussions on March 6, the king offered to relinquish Hawaii's treaty rights to extraterritoriality in Japanese ports; ultimately, the Japanese rejected the offer, in order to avoid international relations complications. On March 8, the king was honored with a military parade; according to Armstrong, as many as 10,000 men participated in the parade. Kalākaua rode alongside the Emperor as they reviewed the troops. The following day, during tours of the naval academy, Fukiage Gardens, and military barracks, the king was accompanied by the 15-year-old Prince Yamashina Sadamaro. Later in his stay, Kalākaua would propose to the emperor, through intermediaries, that Hawaiian Princess Kaʻiulani, then six years old, be betrothed to Yamashina. This proposal was turned down, in letters from Prince Yamashina in January and from Foreign Minister Inoue Kaoru in February the following year.

Discussions during Kalakaua's visit also included the king's proposal for a Union and Federation of Asiatic Nations and Sovereigns, which would include Japan and Hawaii, among numerous other Asian and Pacific polities, in an alliance against the encroachment or pressures of the Western powers.[2] Kalakaua also offered to retract, or dissolve, any rights to extraterritoriality in Japan for Hawaiian citizens. While the Meiji Emperor is said to have much appreciated these two suggestions, he rejected both as having too much potential to cause diplomatic difficulties with other powers.[9]

Following a luncheon at the home of Prince and Princess Higashifushimi the previous day, on March 14, Kalākaua became the 13th person to be awarded the Order of the Chrysanthemum, the highest order awarded by the Emperor of Japan. This took place in the main reception room at the Imperial Palace, where the king and his men had come for a formal luncheon. Dressed in all their formal clothes and orders, they were formally received by the emperor, who bestowed the Order of the Chrysanthemum upon the king, and the Order of the Rising Sun upon Judd and Armstrong. During the luncheon which followed, a telegram arrived informing everyone of the death of Emperor Alexander II of Russia. In accordance with European royal etiquette, both Kalākaua and his men, and the Japanese Imperial Court went into mourning; a number of events and entertainments which had been planned, including balls at the Masonic Fraternity in Yokohama and at the Enryôkan, were canceled.

The following day, on March 15, the Emperor met with King Kalākaua at the Enryôkan. Kalākaua bestowed the Order of Kamehameha I upon the Emperor, and upon Princes Arisugawa, Fushimi, Higashifushimi, and Kitashirakawa.

On March 16, Kalākaua departed Tokyo aboard the Tokio Maru, passing through Kobe, the Inland Sea, and Nagasaki before departing Japan entirely on March 22.